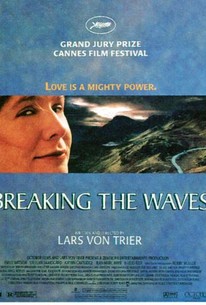 With Breaking The Waves, director Lars von Trier fashions an often disturbing tale of the singular power of love. Bess (the Oscar-nominated Emily Watson) is a naïve, borderline simple young woman who lives in a Scottish coastal town ruled by the religious doctrine of its council of elders. Recovering from a mental breakdown caused by the death of her brother, Bess marries a rough yet compassionate and attentive oil rig worker named Jan (Stellan Skarsgård). For a brief time, the couple enjoys peaceful wedded bliss, with the worldly Jan introducing Bess to the mysteries of sex. Jan must soon return to his job on the rig, however, where he is paralyzed from the neck down in a freak accident. Bess' emotional trauma over Jan's injury turns into obsession as she prays to God for his recovery and offers to do anything to have her husband back whole. Jan, constantly medicated and profoundly depressed, asks Bess to have sex with other men and tell him about it, thinking this will allow her to return to a normal life. Bess, on the other hand, sees it as an expression of her devotion to Jan that even God won't be able to ignore. Bess's resultant downward spiral leads to a finale of both tragedy and spirituality. Breaking the Waves is widely regarded as one of the most distinctive European movies of the 1990s, marking von Trier's movement toward his influential Dogma 95 school of filmmaking, which emphasizes realistic situations of contemporary life, filmed without background music and with a hand-held, restlessly moving camera. ~ Don Kaye, Rovi

Udo Kier
as The Man on the Trawler

Jonathan Hackett
as The Minister

Desmond Reilly
as An Elder

Ray Jeffries
as Man on Bus

Bob Docherty
as Man on Boat

Owen Kavanagh
as Man at Lighthouse

Bob Dogherty
as Man on Boat

Ronnie McKellaig
as Precentor
View All

News & Interviews for Breaking the Waves

View All Breaking the Waves News

Critic Reviews for Breaking the Waves

There are few movies around that take such huge risks: this is high-wire filmmaking, without a net of irony.

The performance from newcomer Emily Watson is the centerpiece of this spiritual journey.

It's a remarkable achievement for all concerned, with Katrin Cartlidge, as Bess's widowed sister-in-law, sharing the acting laurels with the radiant Emily Watson, and writer/director Lars von Trier building the emotional and dramatic intensity ...

Watson's Bess is an unforgettable character -- simple, profound, heartbreaking, tragic and yet triumphant.

Breaking the Waves is emotionally and spiritually challenging, hammering at conventional morality with the belief that God not only sees all, but understands a great deal more than we give Him credit for.

Emily Watson gives this musty spiritualism a flesh and-blood sympathetic center. Her purity of emotion, be it bliss, fear or sorrow, are convincingly unactorly and the camera -- even Von Trier's handheld pseudo-documentary one -- loves her face.

Both a ferocious love story and a tale of the triumph of vital individual faith over ossified and corrupt organized religion.

Issues of faith, devotion, sexuality and divine intervention are at the center of this daring and provocative piece that placed writer-director Lars von Trier on the international map.

It's a testament to Emily Watson's astounding performance as Bess that she comes across as more than a von Trier construct; she's a woman of boundless passion, who follows her faith wherever it takes her.

Von Trier may put his characters and the viewer through the ringer, yet his empathy toward both is unmistakable.

Here is a film that makes you feel like you've read the novel, seen the movie, and lived the life of a protagonist more empathetic than any other. You just might need a stiff drink afterward.

Audience Reviews for Breaking the Waves

It is curious to see how Lars von Trier uses a number of plot elements and devices that could be simply considered too hard to buy and more appropriate in a soap opera, and yet he manages to make everything so touching and genuinely devastating, with a powerful performance by Emily Watson.

This was definitely a mesmerizing experience. The film is about so many things but what stood out most to me was the religious subject matter. There's definitely a lot that can be said, little that I agree with, and a lot that could make you feel just depressed/disgusted about the whole thing. The film just punches you in the gut. In conclusion... definitely worth watching.

Emily Watson is a wonderful actress, her performance is the only thing this ugly thing has going for it. Mean spirited ultimately pointless film. The ending has to be one of the dumbest "ah come on!" moments ever put on film.

An honest, super depressing look at a mentally unstable woman (Emily Watson) and her marriage to an oil rig worker (Stellan Skarsgard), and how they deal with their relationship after he is left paralyzed due to a work accident, and his only demand of her is that she find another lover that will somehow aid his healing. While it is a soul-crushing throughout its duration, and it occasionally threatens to overstep its bounds and become offensive, one can not help but be in awe of the brutal honesty and graphic depiction of a marriage on the rocks Lars von Trier brings to the screen. Not only is it a romantic-drama, it also has a philosophical spin on the nature of religion and how the negative, secluded sections of the religious folk can be some of the worst human beings possible. It is anti-religious, but it is never an illustration of the norm of religious people. It is moreso a frank, disturbing look of a woman who needs help but the very people she turns to forsake her for their own selfish desires. Emily Watson's unforgettable, powerful performance drives this moving all the way to it's discouraging conclusion. It may not be easy to get through given its length and subject, but the way von Trier shoots this thing (with a handheld camera to capture a grainy feel), as well as his handle on the material is something to be in awe of.