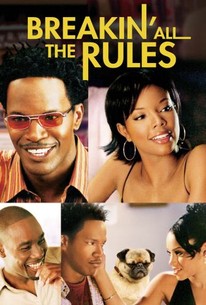 Critics Consensus: This formulaic screwball comedy is weighed down by a contrived, overly complicated plot.

Critics Consensus: This formulaic screwball comedy is weighed down by a contrived, overly complicated plot.

Critic Consensus: This formulaic screwball comedy is weighed down by a contrived, overly complicated plot.

Breakin' All the Rules Photos

A man who writes the book on ending a romance runs into rough sledding while starting a new one in this comedy. Quincy (Jamie Foxx) is a magazine editor whose life takes an unexpected turn for the worse when his fiancée, Helen (Bianca Lawson), decides to give him some interesting news at their engagement party -- she's breaking up with him. A few days later, Quincy's boss, Phillip (Peter MacNicol), gives him the task of cutting manpower in his department by 15 percent; too emotionally beaten to fire anyone, Quincy responds by quitting his job. Deeply depressed, Quincy begins writing a letter to Helen to explain his feelings, but as he analyses his emotions, his notes take a different turn, and Quincy decides to write a book about how to painlessly break up with someone. The book becomes a smash best-seller, and Quincy's friends begin turning to him for advice on the subject of getting out of relations. Quincy's cousin Evan (Morris Chestnut) is eager to call things off with his girlfriend, Nicky (Gabrielle Union), and asks him to do the dirty work for him; however, Evan begins to have second thoughts when he discovers Quincy has fallen for her.

Heather Headley
as Herself

Faune A. Chambers
as The Betty

Mario Carter
as Man at Party

Trae Ireland
as Man at Party

Trina Johnson
as Woman at Party

Clyde Sherman
as Man at Bar
View All

News & Interviews for Breakin' All the Rules

View All Breakin' All the Rules News

Critic Reviews for Breakin' All the Rules

... this is basically just a sitcom.

No movie this stupid should need a plot synopsis this complicated.

A movie that sags and drags under the weight of poor pacing, execrable writing and largely unlikable characters, including a leading man viewers can never really warm up to.

If the movie were 10 minutes longer, the mix-ups might grind viewers down, but director Daniel Taplitz knows how to juggle the subplots he's given.

In many ways a throwback to the era of Doris Day and Jack Lemmon movies.

Not much worth seeing in this mess of a movie.

...may be fluff, but it is patient, character-driven fluff.

Digresses into that hazy zone where we're not sure if we're watching overwrought drama or a joke that just isn't funny.

it's all very silly and highly unbelievable, but the five main leads are all having a good time.

With a little more polish, Daniel Taplitz's quick-witted romantic comedy might have lived happily ever after.

A good cast tries to rescue a bad script.

Audience Reviews for Breakin' All the Rules

Jamie Foxx and Gabrielle Union headline a very funny romantic company. The chemistry between these two is genuine. "Breakin' All The Rules" is a film about mistaken identities gone wild. While the relationship between Foxx and Union is predictable...how the other relationships turn out are not...making you stick around until the end. The movie doesn't waste time...starting out with Foxx's character Quincy getting dumped by his girlfriend. Quincy then writes a successful how-to book on breaking up and that sets off a chain reaction that will keep you in your seat until the end.

The story is half decent, although I think a lot of these films, waste time on film which is just modelling shots. So they found it tough to fit the rest of the story in. But it works, no complaints. Funny !

Breakin' All the Rules Quotes