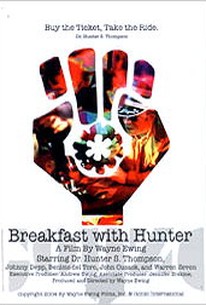 The debut documentary feature from television director Wayne Ewing (Homicide: Life on the Street), Breakfast With Hunter attempts to offer viewers an inside look into the life and mind of gonzo journalist Hunter S. Thompson. Along with discussions of his past writings, the film explores the tumultuous process of adapting Thompson's most famous book, Fear and Loathing in Las Vegas, to film. Along with writers P.J. O'Rourke and George Plimpton, interviews are featured with actors John Cusack, Benicio del Toro, and Johnny Depp, who played Thompson when Fear and Loathing finally came to fruition under the direction of Terry Gilliam.

Critic Reviews for Breakfast With Hunter

You may not want to hang around [Hunter S. Thompson] all the time, but he would be a pretty interesting guy to have over for breakfast.

Do we get to know the real Hunter through viewing Breakfast with Hunter? Possibly. More than ever before, at least.

One should take heart that there are no talking head interviews as there usually are in such documentaries.

Breakfast With Hunter is a cinematic exploration that is perhaps the closest you can get to Hunter Thompson without scoring an invite up to the 'fortified compound'.

Takes a peculiarly predictable and conventional approach to its study of the godfather of gonzo journalism, Hunter S. Thompson

Curiously prosaic for the wicked incisiveness of its subject.

Ever wish you could see what goes on behind those famed, heavily fortified walls of Owl Farm? Here's your invitation.

Audience Reviews for Breakfast With Hunter