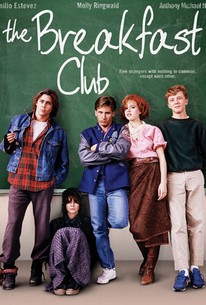 Critics Consensus: The Breakfast Club is a warm, insightful, and very funny look into the inner lives of teenagers.

Critics Consensus: The Breakfast Club is a warm, insightful, and very funny look into the inner lives of teenagers.

Critic Consensus: The Breakfast Club is a warm, insightful, and very funny look into the inner lives of teenagers.

John Hughes wrote and directed this quintessential 1980s high school drama featuring the hottest young stars of the decade. Trapped in a day-long Saturday detention in a prison-like school library are Claire, the princess (Molly Ringwald); Andrew, the jock (Emilio Estevez); John, the criminal (Judd Nelson); Brian, the brain (Anthony Michael Hall); and Allison, the basket case (Ally Sheedy). These five strangers begin the day with nothing in common, each bound to his/her place in the high school caste system. Yet the students bond together when faced with the villainous principal (Paul Gleason), and they realize that they have more in common than they may think, including a contempt for adult society. "When you grow up, your heart dies," Allison proclaims in one of the film's many scenes of soul-searching, and, judging from the adults depicted in the film, the teen audience may very well agree. Released in a decade overflowing with derivative teen films, The Breakfast Club has developed an almost cult-like status. ~ Dylan Wilcox, Rovi

News & Interviews for The Breakfast Club

New on Netflix in September
Which of These 19 Movies Should Never Be Remade?
Blake Jenner’s Five Favorite Films

View All The Breakfast Club News

Critic Reviews for The Breakfast Club

[Hughes] understands adolescents as well as anyone who has ever made movies about them, and he has a fluent way with young actors. In this picture, his dramatic ideas may be cheesy, but Hughes still manages to create some excitement and laughs.

Taking place almost entirely in one room, "The Breakfast Club" is the kind of movie -- and the kind of play -- that's hardly seen anymore. And good riddance.

Hughes has a wonderful knack for communicating the feelings of teenagers, as well as an obvious rapport with his exceptional cast - who deserve top grades.

Hughes may deserve more plaudits as a social worker than a filmmaker, but you have to admit his hokey situation plays. The reason is the five terrific young actors, who bring more conviction to these parts than they perhaps deserve.

Nothing really changes. You hear nothing you haven't heard before. But you know that for them it is happening for the first time, and they deserve compassion. I'm not sure that's a good enough reason to see "The Breakfast Club."

Rarely have on-screen teens felt this authentic. They bluster, bicker and trade horrible insults (whence the film's R rating), then suddenly expose their most guarded feelings.

The film is an extraordinarily well-blended mix of humor, heartbreak, and anger as each character displays a pantheon of raw emotions.

An absolutely outstanding movie, not only one of the best ever made about high school-age kids, but one of the pinnacle films of the 1980s.

Hughes's poignant, sometimes funny, and always thoughtful drama didn't so much revolutionize the teen movie as it mined the genre for long-ignored potential

Had something to say about being an adult and how the lessons we learned as a teenager would carry us in to adulthood, for better and for worse.

Audience Reviews for The Breakfast Club

A smart, moving and funny relic of more than 30 years of age, that takes its characters and their problems seriously in the sweetest way, which really pays off and makes the film still ring true today. It also makes you miss the 1980s sooo much. Don't you forget about me.

An adorable classic of the '80s that still feels fresh, showing five teenage kids opening up about their personal problems with a great dialogue and inspired actions - and it is Judd Nelson who is unforgettable as the rebel youngster that acts as the catalyst of everyone's emotions.

John Hughes' coming-of-age classic is engulfed with brash stars (Estevez, Ringwald, Nelson, Hall, Sheedy) in their most pristine and memorable roles. The Breakfast Club is witty, hysterical and impacting with its in-depth portrayal of high school teenagers in the 80s. The film is heartfelt and is a great motion picture for generations of then, now and the future. 5/5

Powerful and iconic, The Breakfast Club is a well-filmed, well-acted, and quite entertaining coming-of-age film that is, to this day, surprisingly and effectively relatable. It can be slow at times, but you can't help falling in love with and caring for these characters.