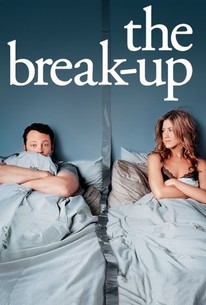 Critics Consensus: This anti-romantic comedy lacks both laughs and insight, resulting in an odd and unsatisfying experience.

Critics Consensus: This anti-romantic comedy lacks both laughs and insight, resulting in an odd and unsatisfying experience.

Critic Consensus: This anti-romantic comedy lacks both laughs and insight, resulting in an odd and unsatisfying experience.

A once-loving Chicago couple whose happily-ever-after quickly turned into a never-again finds their crumbling romance complicated when both parties refuse to move out of the pair's recently purchased condo. The Break-Up is a romantic comedy that starts where all the others end. The future once looked promising for thirtysomething couple Brooke (Jennifer Aniston) and Gary (Vince Vaughn), but lately it seems like a series of increasingly petty and intolerable squabbles have snuffed any semblance of romance in their relationship. Their confrontation endlessly fueled by mean-spirited suggestions of revenge tactics from friends and family and their stubborn refusal to budge resulting in an excruciating stalemate, Brooke and Gary ultimately decide to spitefully stick it out as hostile roommates until the weaker party eventually admits defeat. As the competition to drive one another out grows increasingly intense and outrageous, however, Brooke eventually comes to the realization that she's not fighting for possession of the condominium as much as she is fighting to salvage her relationship with the man she once viewed as the love of her life. ~ Jason Buchanan, Rovi

Jessica Vilchis
as Hot Girl No. 1

Lisa Pace
as Hot Girl No. 2

Wayne A. Brown
as Tourist

News & Interviews for The Break-Up

Rotten Tomatoes Predicts the World Series!
Through Bergman’s Past, Brightly
Jim Carrey Signs On to Be a Yes Man

View All The Break-Up News

Critic Reviews for The Break-Up

This is that branch of the romantic comedy known as 'a relationship movie', but generally short on witty lines and amusing incidents.

Sharp dialogue and detailed observations make it a good deal funnier than you might expect.

Like the story of many broken down relationships: despite the initial attraction, you're left feeling cheated.

It's not a good sign when a movie is called The Break-Up and you can't wait for the couple to split so they'll get some relief from one another, and give the audience some relief from them.

One seemingly terminal problem with the casting of Ms. Aniston and Mr. Vaughn is that neither of their careers has featured characters who excelled at one-to-one relationships with the opposite sex.

Vince Vaughn kills me. Jennifer Aniston, I think, is underrated as a film actress.

So, pick a side, any side. We all know that breaking up is hard to do. You can at least do it with laughter with The Break Up.

was mostly shocked by Vince Vaughan, who showed me for the first time that he wasn't the long-delayed immature frat boy he so often plays, but actually an imperfect hilarious, yet often silly, character who's main flaw is his selfishness.

The two stars remain painfully wrong for each other

Is anxious to be a modern "Annie Hall," but really it is just a tedious, glum, and god awful affair.

"The Break-Up" comes with a slap and a kiss that's at once bracing and pleasing.

Audience Reviews for The Break-Up

Not the best, but has a few moments that make it worth the watch. Definitely not a feel good rom com!

Vaugh and Jen break-up but can they still live together? Jen always plays the same characters. Can't see them together on or off screen.

I like when a movie is titled The Break-Up and people actually BREAK UP! Oops. Spoiler alert. And how nice to see Peter Billingsley's doughy face again from A Christmas Story :~) This isn't a sappy-happy romantic revenge comedy despite its marketing. The semantic misunderstandings between Martians and Venusians are presented realistically in all the arguments, especially the first one that seems to be about lemons, dishes, and ballet but isn't really about lemons, dishes, and ballet. Gary and Brooke actually scream at each other and go through a lot of shenanigans trying to get back together, only to realize the love is gone. No one side is over-demonized, and the long argument scenes filmed with a handheld camera are a refreshing change from the usual joke-laced fights that last for two on-screen minutes. Kudos to effective exposition disguised as a cheesy, opening credit montage accompanied by Queen's "You're My Best Friend." I dig the photos with bad framing and 3/4 views because it must take a lot of work to be so perfectly candid.

Just a movie about a couple who keeps yelling at each other after break-up. Some might not like this movie as it's nothing new to watch. But it's actually taken from reality and most of the parts are really true. They tried to add a bit of comedy in it but I didn't find any of those scenes to be funny. It's an okay type of movie. But I wouldn't spend money to watch this movie that I can tell.