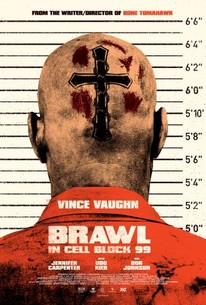 A former boxer named Bradley loses his job as an auto mechanic, and his troubled marriage is about to expire. At this crossroads in his life, he feels that he has no better option than to work for an old buddy as a drug courier. This improves his situation until the terrible day that he finds himself in a gunfight between a group of police officers and his own ruthless allies. When the smoke clears, Bradley is badly hurt and thrown in prison, where his enemies force him to commit acts of violence that turn the place into a savage battleground. From the director of Bone Tomahawk, Brawl in Cell Block 99 stars Vince Vaughn (Hacksaw Ridge), Jennifer Carpenter ("Dexter"), Udo Kier (Blade) and Don Johnson ("Miami Vice").

Mustafa Shakir
as Andre
View All

I can't remember violence in a film eliciting such verbal reactions.

Vaughn's performance is hard, dark, and mercilessly committed, and the film gives you nowhere to hide from it - no twangs of irony or conspiratorial winks to take the edge off what ensues.

In terms of its storyline alone, this is a bit of a potboiler, a typical prison drama, but the dialogue is razor sharp and the performances, especially that of Vince Vaughn, are far more nuanced and poignant than you'd expect.

Vince Vaughn is so intimidating in "Brawl in Cell Block 99," even the back of his head seems to be glaring at us and asking, "Do we have a problem here?"

Writer-director S. Craig Zahler takes his handiwork so seriously that viewers may do the same.

...the kind of vicious, no-nonsense prison drama that dads dream about when the TV is finally theirs to command.

Brawl in Cell Block 99 is a bone breaking, face stomping, skull crushing experience that is viciously torturous to endure at times, but is lustfully satisfying when you've had a rough day.

...a slow-moving narrative that grows more and more absorbing as the admittedly familiar storyline unfolds...

Undoubtedly, Brawl will be too much for many, if not most, viewers, and even if the violence doesn't put you off, the surrealness of it just might. Roll with it, though, and it's a brilliant, skull-shaking thriller unlike anything else you'll see.

Jack Blackwell
One Room With A View

I celebrate the catharsis of Cell Block 99 for dramatizing the personal virtues imperiled by venal officials and partisan social arbiters as well as by fate.

Vaughn's unrelentingly great performance anchors a movie that will engage you for every minute of its runtime. Surprisingly very, very good.

Matt Hudson
What I Watched Tonight
View All Critic Reviews (90)

A no-nonsense prison film about a square guy dealt a bad hand, and then how he plays it. Vince Vaughn breathes through this like an old school steam engine freight train, powering this testosterone nightmare into dream status. By the end, you might consider wanting to go to prison yourself. Grindhouse confectionary contentness.

They don't make 'em like this anymore! Brawl in Cell Block 99 is not just the best of Vince Vaughn's career, it's also one of the best movies of the year. Not for the faint of heart, but something that will stay with me for a long time to come.

The film is at it's best when it indulges in it's little digressions and oddities (Vaughn tearing a car apart with his bare hands, Fred Melamed's cameo as a snooty prison guard, Don Johnson's monologues, etc.) Some of the brutality is a bit much, but it's thankfully brief.

This was a really cool movie that has a consistent tone throughout. Vaughn has the best role for quite some time and he doesn't waste a second, you would be forgiven for forgetting all the romcom films he has churned out. The film is another showcase for the filmmaker Zahler, he really delivered something interesting in 2015 with Bone Tomahawk and wastes no time with the next film. The film is very violent in the later half of the film and plays like some of the outrageous moments in Tarantinos films. Zahler is going to be the successor to the cult film empire and I look forward to his next film experiment. Vaughns career is on a different trajectory and it is very interesting to see where he goes next too. 16-12-2017.