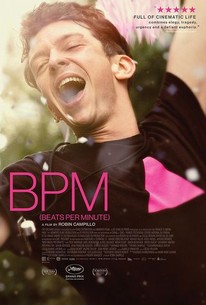 Critics Consensus: Moving without resorting to melodrama, BPM offers an engrossing look at a pivotal period in history that lingers long after the closing credits roll.

Critics Consensus: Moving without resorting to melodrama, BPM offers an engrossing look at a pivotal period in history that lingers long after the closing credits roll.

Critic Consensus: Moving without resorting to melodrama, BPM offers an engrossing look at a pivotal period in history that lingers long after the closing credits roll.

In Paris in the early 1990s, a group of activists goes to battle for those stricken with HIV/AIDS, taking on sluggish government agencies and major pharmaceutical companies in bold, invasive actions. The organization is ACT UP, and its members, many of them gay and HIV-positive, embrace their mission with a literal life-or-death urgency. Amid rallies, protests, fierce debates and ecstatic dance parties, the newcomer Nathan falls in love with Sean, the group's radical firebrand, and their passion sparks against the shadow of mortality as the activists fight for a breakthrough.

And yet BPM (meaning beats per minute) is a beautiful film, full of drama and humour, love and politics, argument and action.

Perhaps more impressively [director Robin Campillo] squeezes drama from the group meetings, which in most films would be snooze-fests.

The film captures very vividly indeed the urgency and turbulence of the period in which the AIDS epidemic took hold.

"BPM" is an affecting memorial about being alive and being heard - a movie that says the only things that matter in life are love, righteous struggle, and the joy of being with others. It shakes all three until their atoms get up and dance.

[Director] Campillo tries to give both personal and political equal weight (or at least equal screen time), and proves more adept at the latter: never have highly regulated meetings to propose policy and review results been so richly engaging.

[BPM] devotes significant screen time to philosophical debate but also appeals to the senses with graphic sex and a throbbing techno score by Arnaud Rebotini.

Far from simply an "issue" film, BPM is an incisive, moving portrait of what it feels like to occupy its subjects' skin, to feel a sense of both acute sexual ecstasy and love and also a powerful, encroaching doom.

BPM (Beats Per Minute) is, for once, a stellar consideration for some of the courageous souls who dedicated their lives to the activism which eventually resulted in necessary visibility.

It is a film that will stay with you possibly forever also thanks to a killer soundtrack of selected, remixed cult hit songs and a score composed by Arnaud Rebotini.

Good performances - especially that of Nahuel Pérez Biscayart - and a portrait of this disease that goes beyond the usual in the cinema. [Full Review in Spanish]

Could have used a little bit more of Act Up's uncompromising spirit to keep it from becoming too bland.

There's heartbreak aplenty amidst this delicate balance of life and death but cause for optimism too as these young people take indifference to task.

Much of the movie is focused on the hard work of activism and while that material is certainly interesting its the emotional final act where the human cost of the AIDS epidemic is really felt.

The experience of watching this film can be nearly unbearable, as it not only depicts the strenuous efforts of ACT UP in the '80s but mainly forces us to look and face the horrible consequences of an epidemic that ruined the lives of so many people while those in power refused to see.