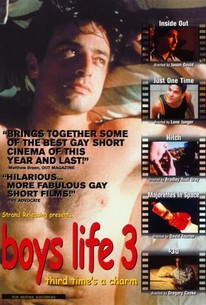 The third entry in the Boys Life series collects another set of gay-themed indie shorts. In Inside Out, writer/director/producer Jason Gould -- son of Barbra Streisand and Elliott Gould -- plays Aaron, a slightly fictionalized version of himself. Over the course of 30 minutes, Aaron dodges paparazzi, dates a closet case, hangs out with his best friend (Alexis Arquette), and attends a celebrity child support group run by writer/guru Christina Crawford. Gould's father and his stepbrother, Sam Gould, appear as thinly veiled versions of themselves, while several other celeb offspring make cameos. Des Majorettes Dans L'Espace (Majorettes in Space), by French writer/director David Fourier, examines AIDS, religious values, and sexual freedom through a mixture of playful animation, tongue-in-cheek narration, and sometimes mournful live-action scenes. Hitch, directed by Bradley Rust Gray, maps out the sexual tension between two chain-smoking young men, one bisexual and one straight, as they travel the Southwest in a retro van. Writer/producer Christopher Landon's $30, directed by Gregory Cooke, portrays the unorthodox meeting between a matter-of-fact young hooker (Sara Gilbert) and a skittish teenaged virgin (Erik MacArthur) whose father has purchased the girl's services as a gift. And in the seven-minute Just One Time, triple-threat filmmaker Lane Janger plays a ménage à trois-obsessed man who begs his girlfriend (Joelle Carter) to have sex with him and another woman. Things heat up when their gay and lesbian neighbors (Guillermo Diaz and Jennifer Esposito) overhear the couple fighting. The entire cast of Just One Time reunited for Janger's feature of the same name, which appeared around the same time as Boys Life 3.

Christina Crawford
as Herself

Tara Karsian
as Woman at Group

I found myself pleasantly surprised as three of the five films proved excellent, one of middling quality, and only one a clunker.

The third installment of this omnibus series of short gay films and, unfortunately, it's by far the weakest.

There are no featured reviews for Boys Life 3 at this time.