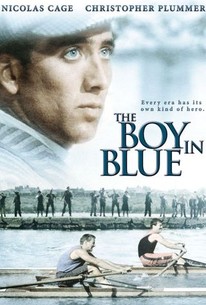 The Boy in Blue Photos

To fully appreciate Boy in Blue, it's helpful to know a little bit about the sport of "sculling"-or competitive rowing. Nicolas Cage stars as the real-life Ned Hanlan, who at the turn of the century was Canada's foremost sculling champ. A wild, uncontrollable youth, Hanlan is "adopted" by a gambler named Bill (David Naughton), who promotes the boy on the sculling circuit for his own monetary gain. Ruthlessly businessman Knox (Christopher Plummer) assumes control of Hanlan's career, but when Ned discovers just how ruthless Knox can be, he casts his lot with the first honest man he's met, inventor-speculator Walter (Sean Sullivan). Hanlan's professional success is capped by his marriage to Margaret (Cynthia Dale), Knox's previously unattainable niece. The by-the-numbers Boy in Blue was given an R rating due to a few disposable sex scenes, thereby cutting its potential audience (hero-worshipping youths) in half.

Ian Heath
as Boy on Steamer

Roger McKeen
as McCoy Man No. 1

Roger A. McKeen
as McCoy Man #1

Critic Reviews for The Boy in Blue

There are no critic reviews yet for The Boy in Blue. Keep checking Rotten Tomatoes for updates!

Audience Reviews for The Boy in Blue

There are no featured audience reviews yet. Click the link below to see what others say about The Boy in Blue!

The Boy in Blue Quotes