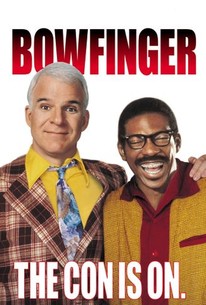 Critics Consensus: A witty commentary on modern film-making, with enough jokes to keep it entertaining throughout.

Critics Consensus: A witty commentary on modern film-making, with enough jokes to keep it entertaining throughout.

Critic Consensus: A witty commentary on modern film-making, with enough jokes to keep it entertaining throughout.

Bobby Bowfinger is a shameless wannabe film producer, who is desperate to break into the Hollywood big-time in spite of the fact that he's broke and unconnected. His plans are thwarted when he is unable to land Hollywood's hottest action star, Kit Ramsey for the lead roll in his movie. Undaunted, Bowfinger decides to make the film with Ramsey anyway, except that Kit won't know he's in it. Determined, Bowfinger and his motley crew surreptitiously stalk their unwitting star through the streets of Los Angeles. They film Kit's every move and trap him in scenes he doesn't know he is in, turning Kit's life into a paranoid nightmare, as Bowfinger's crazy schemes become more and more outrageous.

Phill Lewis
as Actor at Audition

The best thing about Bowfinger is the way the script by Steve Martin is tooled to his own and Murphy's comic strengths.

This is enjoyable but thin, which is no doubt what was intended.

Preposterous and utterly self-absorbed, this has la-la land down to a tee.

Martin the writer plants some wicked barbs in Hollywood's rear end about creative financing of movies and hoarding of profits, the art of the deal, hipper-than-thou attitudes and exploitation.

This is his first screenplay since L.A. Story, yet you get the sense that Martin has lost some of the artistic aspiration he once brought to the movie business. This effort feels like it's just business.

The minor characters are also great - most notably, Heather Graham..., Christine Baranski as a deluded stage veteran, and Eddie Murphy again in a second, surprise role that caps off the mayhem with just the right dash of stupidity.

Directed by Frank Oz and written by Steve Martin...

Bowfinger (1999), Steve Martin's tribute to shoestring filmmaking and big-screen dreams, is a loving lampoon that gamely straddles the chasm between cynical con-artistry and benign innocence.

Entertaining, great actors but not a home run.

Hugely funny film that mixes knowing satire with winning stupidity, and has Martin and Murphy in form they have rarely managed in recent years.

A showcase for wit.

"Bowfinger" embraces the horrible things that have always come from Hollywood, from the scams to breaking the law, and displays them in a very comedic way in this film, making a film that is clearly going to be terrible from the beginning. Eddie Murphy and Steve Martin shows their true acting talents here as Martin's character runs around the city trying to film Murphy's character to make a film with him as the main star. Things conveniently fall into place and some scenes feel bit easy, but in the end the film is a blast to watch and it really made me laugh a lot. It's not the greatest film in the world, but if you are a fan of films, you should have a blast watching this. The director had an eye for detail her and the screenplay is genius. "Bowfinger" is great!

Bowfinger is a terrific comedy film. Steve Martin delivers a great performance. I'm usually not a big fan of Eddie Murphy, but in this film he truly is hilarious and gives one terrific performance. A unique comedy, Bowfinger is different from other comedies. The humour is smart, and the acting is great. Which is something that won't appeal to many film viewers, but to those who love this type of humour, give this film a view. The films story is very original, and Martin and Murphy give hilarious performances.

I actually think this is a great movie, it's Steve Martin and Eddie Murphy at the top of their game. Neither have made a better movie since, only making this look like even more of a gem. The movie within a movie aspect is done perfectly, I almost want to see a full version of the horrendous-yet-hilarious sci-fi epic they made. I think the shameless nature of a lot of the characters makes it a lot more realistic and likable than it might have been if they were good people.

Occasionally very funny film concerning a down-on-his-luck movie producer who decides to shoot a movie with the biggest action star in the world - only he doesn't know he's in the movie. While the plot is very clever and it executes some things very well, at the end of the movie I couldn't help but feeling it had potential to be something so much better and funnier. It's definitely an average comedy, but with two huge comedy stars like Steve Martin and Eddie Murphy, this thing could've been an absolute riot. I laughed, just not enough to give it a full recommendation.