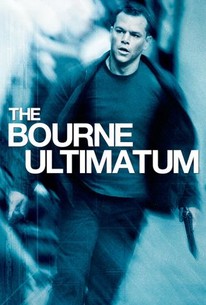 Critics Consensus: The Bourne Ultimatum is an intelligent, finely tuned non-stop thrill ride. Another strong performance from Matt Damon and sharp camerawork from Paul Greengrass make this the finest installment of the Bourne trilogy.

Critics Consensus: The Bourne Ultimatum is an intelligent, finely tuned non-stop thrill ride. Another strong performance from Matt Damon and sharp camerawork from Paul Greengrass make this the finest installment of the Bourne trilogy.

Critic Consensus: The Bourne Ultimatum is an intelligent, finely tuned non-stop thrill ride. Another strong performance from Matt Damon and sharp camerawork from Paul Greengrass make this the finest installment of the Bourne trilogy.

Jason Bourne (Matt Damon) races to solve the mystery of his past while being hunted by members of the very organization he was hired into as director Paul Greengrass brings author Robert Ludlum's popular character back to the big screen for his third feature outing. David Strathairn, Julia Stiles, Joan Allen, and Paddy Considine co-star. ~ Jason Buchanan, Rovi

News & Interviews for The Bourne Ultimatum

View All The Bourne Ultimatum News

Critic Reviews for The Bourne Ultimatum

t's full of tension, but it's also disturbing on another level: it's hard not to be reminded of recent events.

Bourne -- or whatever his name really is -- is such a resourceful and reckless agent of chaos, we thrill to him despite the fact that he's officially a non-entity.

While the crunchy fights and unflagging pace ensure this delivers as genre spectacle, the muddy ethics also make for a pleasing contrast with standard-issue wham-bammery.

Greengrass comes full circle from the War on Terror film that bit its tongue to the popcorn flick that speaks volumes.

Not only far and away this summer's best three-peat, it's a pulse-pounding peak to Matt Damon's spy trilogy.

As good as the first two films were, as well as they redefined the action espionage thriller, the third film falls victim to its own innovation.

The third Bourne instalment is not just the best of the franchise, but also one of the finest and most forceful action releases of the past decade.

The best movie this summer. Straight to the Top 5 of the year. [Full review in Spanish]

Bourne's aim may be righteous, but it is also most definitely self-serving.

Damon excels as the taciturn former assassin who regrets his past wrongs even though he can't clearly remember them. As with the previous two installments, the supporting cast is top-notch.

As an action film, The Bourne Ultimatum is in a class of its own.

Margaret Pomeranz
At the Movies (Australia)
View All Critic Reviews (265)

Audience Reviews for The Bourne Ultimatum

This excellent third chapter is the best of the trilogy, with non-stop thrilling action, great performances and an intelligent plot that plays with our own perception of what we thought we knew (especially the last scene of the previous film) to come up with a satisfying conclusion.

The final installment of the Bourne franchise sees Matt Damon finally discovering who he is and who's behind this fine mess he's in. I must admit, I found this film an odd one. The usual formula of a thriller involves the story being set up for the first two thirds of the film, and the last half hour climaxes with a frenetic action set piece. In The Bourne Ultimatum, it's the other way round! The first hour and a half is more of Greengrass' wobbly cam following an earnest looking Damon as he runs through interchangeable corridors, chases down generic bad guys and speeds through traffic. There is literally no plot til the last half hour. It reminded me of The Matrix trilogy in that the second film seemed irrelevant, and the two sequels could easily have been compressed into one superior film. But as it stands, it's an entertaining enough thriller which ties up the story satisfactorily (if unsurprisingly) and at least the direction contained more drama and less seasickness than the second (the climactic car chase is actually very impressive indeed.) Still not as good as the first but it will please fans of the series.

One of the best action flicks I've ever seen. From the moment the movie starts until it's jolting end, you are on the ride of your life. Damon, who I would have never imagined as an Action Star, has solidified his place among one of the greats

saw this one too