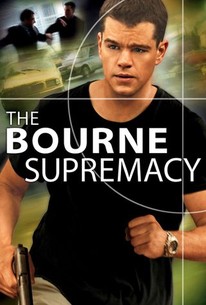 Critics Consensus: A well-made sequel that delivers the thrills.

Critics Consensus: A well-made sequel that delivers the thrills.

Critic Consensus: A well-made sequel that delivers the thrills.

The second chapter in the "Bourne Trilogy," based on Robert Ludlum's best-selling espionage novels, reaches the screen in this sequel to the 2002 thriller The Bourne Identity. Jason Bourne (Matt Damon) has abandoned his life as a CIA assassin and has been traveling beneath the agency's radar, eventually reconnecting with Marie Kreutz (Franka Potente), the woman he loves. But Bourne is haunted by vivid dreams and troubling memories of his days as a killer, and he's not certain how much really happened and how much is a product of his imagination. When Bourne is led out of hiding by circumstances beyond his control, he must reconcile his past and present as he struggles to keep Marie out of harm's way and foil an international incident with dangerous consequences. The Bourne Supremacy also features Joan Allen as one of Bourne's superiors, while Julia Stiles and Brian Cox reprise their roles as intelligence agents from the first film. ~ Mark Deming, Rovi

News & Interviews for The Bourne Supremacy

View All The Bourne Supremacy News

Critic Reviews for The Bourne Supremacy

[Director] Greengrass proves himself equally adept at action, building on the edginess of Doug Liman's original with a feverish handheld camera and frenetic editing.

A brisk, engrossing and intelligent thriller.

Of its kind, The Bourne Supremacy is incredibly skilled -- much more exciting than its predecessor.

Another of those incoherent Robert Ludlum spy thrillers with more logistics than logic.

An entertaining, well-constructed spy story (though not as satisfying as the first film -- perhaps because it's not as simple).

Needless to say, the viewers also get to drink in some awesome landscape, particularly the snowy, wintry Moscow. Where Supremacy differs from Identity is that questions do get answered here eventually.

Despite its grave themes (or perhaps because or them), The Bourne Supremacy is still supremely thrilling.

The strengths are amazing, and it's pretty impressive how thoroughly and successfully the movie rewrote the vocabulary of action cinema.

A minor step above the entertaining (yet underwhelming) The Bourne Identity...

Second in trilogy is a smooth but violent thriller.

Audience Reviews for The Bourne Supremacy

Even superior to the first movie, this exhilarating sequel boasts a lot of action while it is always exciting to see Bourne use his brains and skills to stay one step ahead of the people who are after him, creating a clever inversion of roles in which the hunters become the prey.

It's witty and stylish, especially with the addition of director Paul Greengrass. The Bourne Supremacy picks up where 'Identity' left off with even more action/thrills and a well-made script that personifies this rogue amnesiac super agent. 4/5

Hyper-caffeinated camerawork and editing really detract- Greengrass incapable of holding a shot. Dammit, my eye moves around the frame you don't have to move them for me. Still - a lot of smart fun and Damon is very good.