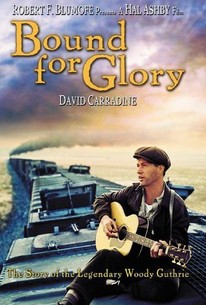 Critics Consensus: Bound for Glory brings the Dust Bowl era to authentic life thanks to Haskell Wexler's opulent cinematography and Woody Guthrie's resonant music, capturing the American mood at the time as much as it does the folk singer's life.

Critic Consensus: Bound for Glory brings the Dust Bowl era to authentic life thanks to Haskell Wexler's opulent cinematography and Woody Guthrie's resonant music, capturing the American mood at the time as much as it does the folk singer's life.

Based on the autobiography of iconic folk singer Woody Guthrie, who wrote "This Land Is Your Land." Unable to find work in Texas after the Dust Bowl devastation of the 1930s, Guthrie left his family with relatives rode the rails with thousands of men, traveling to migrant worker camps in California, recording the brutality and injustices he witnessed in song. Eventually, Guthrie's protest music earned him a following through the radio and he rode the rails to New York to find a larger audience.

News & Interviews for Bound for Glory

View All Bound for Glory News

Critic Reviews for Bound for Glory

There are images in Hal Ashby's Bound For Glory so striking or so beautiful I doubt I'll ever forget them... The film has a grave dignity, which is good, but it often seems to lack life, which would be better.

One half of a very good movie.

Bound for Glory is outstanding biographical cinema, not only of the late Woody Guthrie but also of the 1930s Depression era which served to disillusion, inspire and radicalize him and millions of other Americans.

An overlong, sentimental and lifeless biopic of Woody Guthrie.

The role was earmarked for Dustin Hoffman, Jack Nicholson and Robert De Niro (among others), but it's hard to imagine even these accomplished thespians matching the sly insouciance or devil-may-care charm which Carradine makes indispensable to the part.

It's a story that's truly worth telling, but should have been pruned by 30 minutes and it wouldn't have lost a thing artistically.

A moving, brilliantly photographed picture that portrays the legendary eccentric folksinger Woody Guthrie in a trip across Depression-era America.

Though made with an eye for the Bicentennial, this biopic of folk singer and union organizer Woody Guthrie didn't make any attempt to speak to contemporary viewers, which might explain its box-office failure.

Hope you like folk music, because there isn't much variety to be found among his music. Neither is there much variety in the scenery.

A remarkably touching and humane film about Woody Guthrie

The major strengths of the movie are Haskell Wexler's cinematography and the score (both of which deservedly picked up Oscars): they create a sense of time and place perfectly in accord with the story.

Audience Reviews for Bound for Glory

This might be based on folk legend Woody Guthrie's autobiography, but it comes off as less of a biopic, and more of an origin story of sorts, basically a tale of how a situation not all that dissimilar from The Grapes of Wrath led to a man changing the face of folk music and specifically politically charged protest tunes. It also is the first time that I actually felt rather underwhelmed and let down by Hal Ashby. This is a very well meaning film, and some of it is done quite well, but overall, this is far more flawed than I was expecting. I think it might have to do with the fact that for some reason, it comes off as feeling like a cheap, TV movie of the week sort of affair, and not some epic look at how Woody Guthrie helped get people through the Great Depression. The pacing is pretty slow and uneven, and the way the film is structured is like this, too. It's kinda all over the map. I do think that David Carradine gives a great performance though. It's definitely one of his best. He carries the film, and ultimately saves it from being worse. Ronny Cox is also good, probably the second best one here, but where Melinda Dillon and Randy Quaid are concerned, I was let down. I love those two, but they just didn't do it for me. I said the film feels cheap, but that's surprising since Haskell Wexler's cinematography is quite good. It definitely captures the essence of the era, so maybe the TV feelings come from the execution. Plus, this film featured what I believe was the first steadicam-based long take tracking shot, and I generally just go nuts for that sort of things. All in all, this film is an overlong mess, but it does have its moments. Carradine and Wexler make it worth it, but I feel like somebody really dropped the ball here, and that this is one of the times where I think a remake is definitely warranted.

I could watch David Carradine and Ronny Cox sing duets all day, especially when it is being filmed by Haskell Wexler. The film looks beautiful and is more about Guthrie's music and its roots (almost a pre-cursor to Haynes' Bob Dylan bio-pic). The problem is that the movie rambles too much and ends too quickly, wrapping up too nicely for my taste. Carradine and Cox give amazing performances, but the film falls a little short.

As a fan of Guthrie's music and someone who has always been oddly drawn to the stories of depression era America (it's so surreal!) I found this film to be enjoyable to spike the fact that it feels (at times) a bit "made for tv". It is just as much a film about the period as it is about Guthrie and his music. So much so that I was left wishing it would have given more details about him and his life.

Great performance by David Carradine but some of the domestic stuff plays a bit like a made for TV movie to me. Hey look! Annother bare-bones DVD realease from MGM! I shouldn't complain, at least the transfer was decent which is way better than the usual from these clowns.