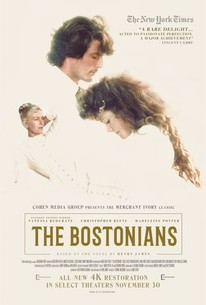 Adapted by Ruth Prawer Jhabvala from the novel by Henry James, Merchant/Ivory's The Bostonians is set among the Back Bay uppercrust of the 19th century. Basil Ransom (Christopher Reeve), bored by his opulent lifestyle and his "proper" friends, is fascinated by his cousin, outspoken suffragette Olive Chancellor (Vanessa Redgrave). Basil and Olive's mutual friend is likeable, gregarious Verena Tannant (Madeleine Potter). Soon a triangle develops, albeit an unorthodox one: Basil and Olive both find themselves pursuing Verena, Basil because he is in love with her, and Olive because she wants to exploit Verena's social connections and gift for public speaking to promote her own political ideology. Lurking in the background is Verena's true love, poor-but-honest attorney Henry Burrage (John Van Ness).

Critic Reviews for The Bostonians

''The Bostonians'' is, from its opening shot to last, a rare delight, a high comedy with tragic undertones, acted to passionate perfection by a cast of the best actors ever assembled by the Merchant-Ivory-Jhabvala team.

James' story is so fascinating and Redgrave so urgently fine that you can lose sight of these lapses and have an eminently satisfying time.

Like the Merchant-Ivory-Jhabvala team's 1979 The Europeans, this is a classy adaptation of a Henry James novel.

''The Bostonians,'' which opens today at Cinema I, unfolds elegantly but not always smoothly... But the performances, especially that of the astonishing Miss Redgrave, generate an urgency and momentum to match Mr. James's own.

The women's movement as a whole is... presented in the film as the creature of a couple of reporters on the make and a handful of aristocratic Boston spinsters whose other pet causes include faith healing.

Look past the frilly costumes and posh accents of The Bostonians and you'll find a battle of the sexes that remains relevant into the twenty-first century.

Reeve is earnest if not entirely believable in a pivotal role, but Redgrave and Potter are excellent.

Merchant Ivory screen adaptation of Henry James' novel is handsome, but suffers from the miscasting of Christopher Reeve and Madeleine Potter, though Vanessa Redgrave is decent.

A literary work with exquisite production values and a vivid portrait of class differences in Boston social life at the turn of the century.

Audience Reviews for The Bostonians

Christopher Reeve is good if a bit stiff and Vanessa Redgrave is exquisite as always but the pace is slow and the central character and lead actress lack a radiance and fire that is essential for the story to engage.

An early Merchant-Ivory offering. It frankly just isn't very good. Poor Christopher Reeve had real problems when he had to stretch himself.