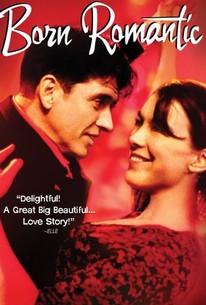 In modern-day London, three men and three women fall in and out of love and back again, to the Greek-chorus accompaniment of two cab drivers (Ian Hart and John Thomson), who engage in an ongoing conversation about sex. In one pairing, Eleanor (Olivia Williams), a sophisticated and slightly anal art restorer, is pitted against Frankie (Craig Ferguson), a smartly dressed divorcee who still shares a flat with his bitter ex-wife. The two meet one night at a salsa club, and a caustic attraction soon flourishes. Another pairing sees Mo (Jane Horrocks), a tough, love-'em-and-leave-'em Liverpuddlian, reunite with Eddie (Jimi Mistry), a clumsy bloke who was in love with Mo years before and now dreams of winning her back. Meanwhile, Jocelyn (Catherine McCormack), a young woman both neurotic and without self-esteem, finds unlikely happiness with the slovenly Fergus (David Morrissey), who bemoans the lack of love in his life. Born Romantic is the second feature of British writer/director David Kane, who made his feature debut with the similarly themed This Year's Love in 1999.

Is whimsicality the last refuge of the mediocre?

One can't fend off the feeling that we've been here before, and with some regularity.

Except for Jimmy ... these are not very interesting folks and, at first, it's hard to keep them all straight or even care.

In its own modest, genial terms, the picture succeeds.

... a rare romantic comedy that gets both the romance and the comedy right.

Like the salsa music that provides the musical backdrop, this pleasantly low-key rom-com proves to be smoothly seductive.

Another example of the unfortunate trend toward sentimentality in British films.

Some of this is funny, most of it just fills space, and the best dancing is done by obvious professionals, not the actors.

Here's a great movie with an incredible story plot. Great music. Fantastic cast. Jimi Mistry is amazing in this movie.