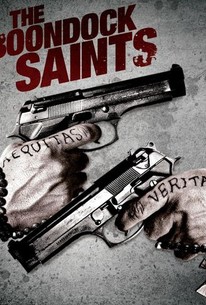 Feeling that they are doing God's will, two Catholic men from Boston set out to kill everyone in this Reservoir Dogs-style vigilante thriller. Brothers Conner and Murphy MacManus (Sean Patrick Flanery and Norman Reedus) take to performing their divine duty against the Russian mob. They massacre a bunch of unsuspecting Mafioso in a scene of absurd violence, then they let more blood in a mass killing of porn-shop customers. Instead of getting thrown in jail, they are dubbed "saints" by the Boston Herald, and they are praised by brilliant, tortured, and gay FBI agent Paul Smecker (Willem Dafoe). ~ Jonathan Crow, Rovi

Richard Fitzpatrick
as The Chief

Peter Windrem
as Reporter No. 1

Elizabeth Brown
as Reporter No. 2

Derek Murchie
as Media Man No. 1

Robert B. Kennedy
as Media Man No. 2

Victor Pedtchenk
as The Fat Man

Jimmy Tingle
as The Priest

Roberta Angelica
as Forensic Woman No. 1

Chris Brinker
as Mafiosa No. 1

Don Carmody
as Mafiosa No. 2
View All

News & Interviews for The Boondock Saints

30 Great Scenes in Rotten Movies
The Boondock Saints Is Bad, but the Scathing Documentary About Its Toxic Director Is Mesmerizing
Weekly Ketchup: Anchorman 2, Dracula: Year Zero, Twilight Zone and Much More

View All The Boondock Saints News

Critic Reviews for The Boondock Saints

Satire or self-parody would be vastly preferable to the film's unironic endorsement of outlaw justice, but you'd be hard pressed to find anything resembling irony or subversiveness in this exercise in lovingly rendered ultra-violence.

More interested in finding fresh ways to stage execution scenes than in finding meaning behind the human urge for self-appointed righting of wrongs, pic is stuffed with effects that have no lasting impact.

The Boondock Saints, on one level, is a really great direct-to-video cult film. Stylish, defiantly endearing, and even borderline iconic.

The Boondock Saints has ended up a cheap looking B-movie that's pretentious, derivative, and sorely lacking a sense of fun.

Willem Dafoe's portrayal of the conflicted homosexual FBI agent is overacted to such an extent that it is hilarious, amazing and entertaining. His is an unforgettable character.

Duffy's models are clearly snarky, ultraviolent Tarantino-esque crime pictures, but this movie's cleverness is never quite on a par with its bloodlust.

An embarrassing waste of time, and nothing even resembling the guiltiest of guilty pleasures...

It's one thing to make a film that's violent and profane; it's another to make one that's a moral black hole, and to do it because black looks cool. [Blu-ray]

While I don't think the flick really has much of a brain in its head ... it sure isn't boring.

Audience Reviews for The Boondock Saints

Two Irish Catholic fraternal twin brothers, inspired by the divine, embark on a mission of bloodshed throughout Boston's criminal underworld as a flamboyant government agent tries to apprehend them while simultaneously taking their side in the stylish, memorable, and wildly entertaining cult favorite. Oh man, how times (or at least me) have changed. When I first saw this, I was blown away. I thought it was an amazing work of art and it proved pretty influential to my life, at least for a while. Now, after revisiting it nearly a decade after first seeing it, I find myself more critical, less impressed, and having a more nuanced reaction. The MacManus Brothers seem like vigilantes who only go after serious sinners, but no, they're not true vigilantes. If anything, they're more like psychotic religious zealots who go on serial killeresque rampages. Sure, they're doing good, but, when you really think about it, they're pretty messed up guys themselves. I still like the religious elements, and the questions of morality and moral ambiguity, but, while I generally like antiheroes, this is a case where the moral ambiguity kinda makes me feel uncomfortable, and it disturbs me some. However, since the film is really idiosyncratic, stylish, and super cool, I can't hate on it too much, as it is entertaining. Yeah, it's pretty derivative, and maybe tries a bit too hard, but I think it still kinda works, even if it is messy, and has become ridiculously popular. Yeah, I'm complaining, but I'm still giving this a pretty high rating because, well, it is fun, it is entertaining, it does raise good questions and makes you think about things, and well, I dunno. It just has this odd appeal to it. Plus, the casting and acting (namely Dafoe, Flannery, Reedus, and Connolly) are solid, and, when the film works, it works well. Yeah, sometimes it goes a little overboard, but it mostly holds it all in. Bottom line: see this thing already. I know it's become a cliche to love this movie, and I admit to blindly going nuts for it, but I have since matured, and, while I know it has a lot of problems, it's still a good movie. Plus, sentimentality is a bitch. I can't hate on something too hard that helped shaped who I've become.

MY THOUGHTS: I liked it, thought it had some good action. Not as funny as I thought it would be. But a good movie none the less. Really liked the 'funny man'. He made me laugh a few times. But Willem Defoe really shocked me in this film. He was great and really stands out in this movie.. You will see why or know why if you have seen this or are going to see this. Anyways, a good time kind of movie with great action, a bit funny, and very much entertaining... See it if you haven't.