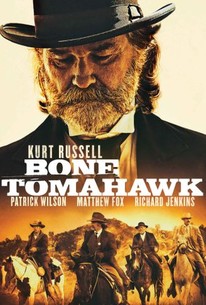 Critics Consensus: Bone Tomahawk's peculiar genre blend won't be for everyone, but its gripping performances and a slow-burning story should satisfy those in search of something different.

Critics Consensus: Bone Tomahawk's peculiar genre blend won't be for everyone, but its gripping performances and a slow-burning story should satisfy those in search of something different.

Critic Consensus: Bone Tomahawk's peculiar genre blend won't be for everyone, but its gripping performances and a slow-burning story should satisfy those in search of something different.

When a group of cannibal savages kidnaps settlers from the small town of Bright Hope, an unlikely team of gunslingers, led by Sheriff Franklin Hunt, sets out to bring them home. But their enemy is more ruthless than anyone could have imagined, putting their mission - and survival itself - in serious jeopardy. This is a gritty action-packed thriller chronicling a terrifying rescue mission in the Old West.

Zahn McClarnon
as The Professor

Jamison Newlander
as The Mayor

Susie Castaneda
as Pregnant Troglodyte A

Marem Hassler
as Pregnant Troglodyte B
View All

It is mostly just an excuse for the debut director, S Craig Zahler, to whip the rug out from under you, Tarantino-style.

You'll be watching - at least, I was - with your hand clamped over a mouth in various states of aghast-ness. But the film's bloodiest moments, in a real turn-up for the books, are also its saddest.

With this film the cowboy genre moves beyond modern and postmodern. You could call it postmillennial, post-apocalyptic, post-ironic.

A precariously balanced, genre-literate oddity with something to say.

...an engaging and often engrossing piece of work...

It finds its gold in the razor-sharp screenwriting and direction of Zahler, honing ace performances all-around.

Each scene, no matter how much it might feel like a total non-sequitur or detour from the main narrative, always keeps the focus on character.

A Western in spirit, but cannibalistic at heart, beautiful landscapes and meandering conversations mix with grizzly ends and an extensive runtime.

It doesn't so much revise the western as bifurcates it with a genre mash of dark, gruesome and bloody originality.

After a bit of a shocker beginning the film gets comfortable in rather regular Western Territory for a while. The pace is slow, but the characters interesting enough and there are odd traces of grim humor here or there. None of that prepares for the gore fest of the showdown with some of the nastiest on screen deaths you've ever seen. You gotta appreciate someone trying something fresh here, even though that's certainly not for everyone. I had to chuckle a few times and my jaw dropped to the ground just as often. Gotta appreciate that.

The easiest way to describe Bone Tomahawk is compare it to a mash-up of The Proposition and The Descent. And seeing that both of those movies are pretty great in their own right, I shouldn't have to say much else about Bone Tomahawk. But I will anyway. Bone Tomahawk's biggest strength is understanding that its slow burn structure has to pay-off at some point and there's no mistaking the moments in which Bone Tomahawk pays off. It's also great that none of the movie's principal performers are bad, everyone is either good or great. Kurt Russell being awesome in a movie isn't particularly surprising (neither is Patrick Wilson being awesome), but Matthew Fox is the biggest surprise, delivering one of the best amoral characters I've seen in a western in a long time. And without giving too much away, this film has some of the best gore-make-up effects I've seen in years. The ending itself leaves a little to be desired, but the overall package is fantastically horrifying and way too cool to pass up. Unless you can't handle extreme violence, in which case you should avoid this movie like the plague.

A little bit of fun with the weary Western format as a small town posse heads out to search for some kidnapped citizens. While the story maintains interest it's how the story gets told that makes this a winner. Very nearly an homage to the classics, time is taken to allow scenes to ferment right in front of the camera, allowing full immersion in the characters and thus the story they tell. Fans of the genre will also enjoy guessing where some elements of the piece were "homaged" from. And then there's the horror twist at the end ...