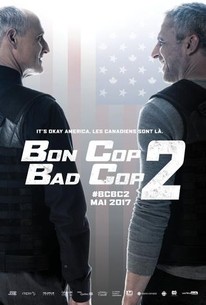 Eight years after first working together, two mismatched Canadian cops team up once again to investigate an auto-theft ring. However, they soon discover that the robberies point to a much-larger conspiracy in this hugely entertaining action comedy.

Bon Cop Bad Cop 2 is the rare follow-up that does not suffer sequel-itis: It's a movie that develops a franchise rather than just cashing in on it.

Feore and Huard's comical rapport kept a silly grin planted on my face for most of the film.

If the film ends up working, it owes something to the current news cycle.

Despite some glossy car chases (maybe more than we need) and violent run-ins with evil mob bosses, the film feels too long for the fluff that it is.

We have here that rare sequel: C'est bon, and it's not half bad.

Let's cut to the chase for those of you who are not particularly patient. Bon Cop Bad Cop 2 is fun and you really should go see it. But it doesn't capture lightning in a bottle the way the original did.