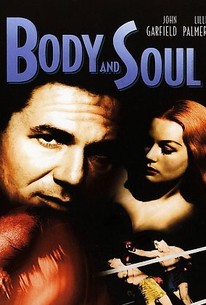 Considered one of the greatest boxing film ever made, Body and Soul features the late-great John Garfield playing pugilist Joe Devlin in his desperate bid to become the world's greatest fighter. Unfortunately, the battle to the top causes him to leave his values and principles behind and though it leads him to success, ultimately it takes him on a tragic dive from which he never recovers. The story is pretty standard for the genre. What makes this tale stand tall above the others is Garfield's riveting performance and the realistic portrayal of the gritty world of professional boxing. The cinematography is also exceptional.

Critic Reviews for Body and Soul

Trite is hardly the word for the plot, which was already wheezy by the time this minor classic was made in 1947, but Abraham Polonsky's script brings such tight, painful focus to the moral choices that it seems fresh and real.

Garfield's bullish performance saves the movie from its stagy moments and episodic script.

Altogether this Enterprise picture rolls up a round-by-round triumph on points until it comes through with a climactic knockout that hits the all-time high in throat-catching fight films.

Body and Soul is a film not simply with gritty boxing scenes but also a fascinating character analysis indicative of the human condition.

If the movie works today, it's probably because of Abraham Polonsky's beautiful screenplay, a rich desert plate filled with glorious, lowdown street and sports prose.

John Garfield gives a wonderful performance in the noir sports melodrama, directed by the blacklisted Polonsky

Now only seems gripping because of Garfield's gritty performance.

The fight film to which all others are compared.

This is tight, hard-hitting entertainment.

Audience Reviews for Body and Soul

sure it's the same tired boxing cliches but polonsky's sharp dialogues and garfield's greatest performance made it well worth watching, for me at least. james wong howe wore skates and rolled around the ring shooting the fight scenes with a hand-held camera, creating a level of realism that influenced 'raging bull'

A look at the corrupt sides of professional boxing. John Garfield plays the corrupted boxer. Fast money, fast women, expensive high rise, a corrupted manager that would make Don King's face light up with glee. "Body And Soul" isn't all that corrupt, Garfield's character has a love intrest, a good friend who is looking out for him and a mother who wishes her son would decide to get an education. Great performances by Garfield, Anne Revere, Joseph Pevney, Lili Palmer, Canada Lee and Lloyd Gough. I gave this a 90 but now am giving this a 60. We've seen this story on screen before people.

Another classic that often gets missed. It was probably the greatest fight movie until Raging Bull came along. A real hidden gem.