Bobby Fischer Against The World2011

Bobby Fischer Against The World (2011) 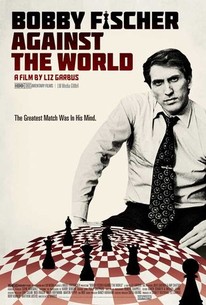 Bobby Fischer Against The World Photos

Considered by many to be the greatest chess player to ever live, Bobby Fischer Against the World is the first and definitive documentary biography of the eccentric genius who rose from humble beginnings and captivated a world audience with his victory over Russia's Boris Spassky at the height of the Cold War. His trajectory propelled him from child prodigy to US champion at age 15 and world champion at 29. Quixotically refusing to defend his championship, Fischer became a virtual recluse for decades before resurfacing for a bizarre final chapter as a fugitive from US justice. Rare archival footage and insightful interviews with those closest to him expand this captivating story of a mastermind's tumultuous rise -- and fall. --(c)Music Box Films

Critic Reviews for Bobby Fischer Against The World

A once-in-a-lifetime character makes for a fascinating documentary subject in producer-director Liz Garbus' "Bobby Fischer Against the World."

Liz Garbus's documentary about the great American chess champion Bobby Fischer does its level best to avoid the easy cliché equating madness and genius, except that, in the case of Fischer, the cliché apparently holds up.

Tactfully but strongly posits a connection between the genius he brought to an infinitely complex game and the madness that defined his relationship to just about everything else.

Supplies a cracked, conflicted genius trapped in his ceaseless endgame.

Garbus handles this decline with tact. The sorry spectacle of the ranting codger never effaces the image of the boy concentrating his entire being over a chessboard. You have to love that kid and pity him.

It's a sad story of genius paying for the gift.

Director Liz Garbus examines the fine line between the hyper-rationality of obsessive genius and barking insanity.

It's a gripping story, in the way we can't stop looking at a train wreck. But it's not what we should remember about him.

Garbus spins the yarn by mashing together interviews, old footage and a funky soundtrack. If you know nothing about Fischer then this is an ideal starting point.

Bobby Fischer Against the World is a decent introduction to who Fischer was... Despite this, the movie contains nothing new about Fischer's life or the reasons for his erratic and outrageous personal behavior.

An affective portrait of an intense, obsessed man and a tense, twisty, and occasionally inspiring narrative surrounding the Fischer-Spassky match.

Audience Reviews for Bobby Fischer Against The World

When I was in college, I would occasionally play a friend in chess. And he admitted he had a hard time playing me, because of my strategy. I didn't have one, so he could not see ahead what I was going to do. Luckily, the documentary "Bobby Fischer Against the World" has a lot to say on the subject of chess strategy, so I was able to learn a thing or two for possible future reference. At the top of the chess pantheon was Bobby Fischer, chessmaster and one time world champion, who was able to play entire games in his head and could outplay almost any other opponent. Sadly, that also included himself, as that same monomania which made him so successful at chess, made him that much less successful as a human being.(There is an intriguing chicken vs. egg debate here concerning his mental illness.) Later in life and post fame, he retains his intelligence to antagonize everybody he encounters with his own brand of twisted and bigoted logic while losing his mind. Centered as the documentay is around the 1972 Chess World Championship versus Boris Spassky, who is still very much alive, oh by the way, Cold War politics come into play.(This chess match was apparently a very huge deal. I love the newscasts of the day that would go - "Watergate...McGovern...but first chess...) But to counter something said in the film, yes, the Soviet state supported its athletes, but they were not professional in the way we think of them today. Rather, they were probably allowed to live in a pretty nice apartment and did not have to stand on line for food.

Fascinating doc. Lots of great footage of Fischer going back to when he was 15 years old.

Bobby Fischer Against The World Quotes