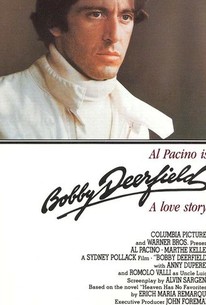 Starring Al Pacino and directed by Sydney Pollack, Bobby Deerfield stars Pacino plays the title character, a reckless race car driver. As his fame grows, Bobby becomes increasingly full of himself, which seriously jeopardizes his performance on the track and his private life. Marthe Keller plays Bobby's aristocratic, enigmatic lady friend, whose tragic secret sets the stage for melodrama. Also on hand is Ann Duperey as a racetrack groupie. Originally released at 124 minutes, Bobby Deerfield was pared down to 99 minutes by director Pollack for cable-TV consumption.

Walter McGinn
as The Brother

Norman Neilsen
as The Magician

Guido Alberti
as Priest In Garden

Bobby Deerfield is a big, slick melodrama that knows exactly what it wants to accomplish and does so with great craft.

A brilliantly unusual love story, told in a European fashion which makes the Sydney Pollack film at first irritating, then intriguing, finally most rewarding and emotionally satisfying.

A classic example of a Hollywood director being struck down by a lethal 'art' attack as soon as he sets foot in Europe.

Bobby Deerfield may turn out to be the year's most cynical movie made by people who know better, including Sydney Pollack, the director, and Alvin Sargent, who wrote the screenplay.

Sydney Pollack, who once took the unlikely materials that made up The Way We Were and pulled them together to come sailing triumphantly home, has done it again in Bobby Deerfield.

Those who feel that Al Pacino did no wrong during the 1970s obviously never saw Bobby Deerfield.

This gorgeously shot film is a trifle long at just over two hours; much of the racing footage could have been dispensed with, along with the sudsiest of the emotions.

A resonant Pacino...though ultimately a misfire, suggests that there are worse things to call a movie than 'a curiosity.' [DVD review]

Pacino is at his best: precise, internal, magnetically cute, and expert at capturing the fear in this man's turtle-like existence and his longing for change.

One of Sydney Pollack's worst films, this sechmaltzy romantic drama about the life and loves of a car racer (poorly played by Al Pacino) has no redeeming qualities in either length; Pollack recut the film to 99 minutes for TV.

A turgidly formulaic disease-of-the-week film elevated to cinematic status purely due to the presence of Pacino.

A bizarre misfire from a talented line-up of artists. With such a towering amount of potential, it is peculiar to see Bobby Deerfield as what it is - a mess. Lacking in any sort of distinguishable narrative or character thread, the movie plods off in numerous directions and leaves the audience behind. The most interesting aspect of it is Al Pacino's understated acting in the title role. Pacino has stated that out of all the roles he's played, this one is the closest to himself in reality. It is evident that he has a deep understanding of this character, but his depth and nuance is lost in a chaotically executed picture.