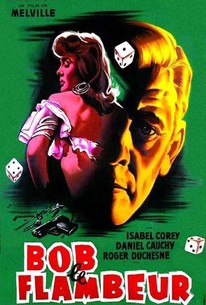 Both a tribute to classic American gangster films and the source of inspiration for French New Wave filmmakers, Bob le Flambeur is the first in a series of stylish noirs that Jean-Pierre Melville started in the mid-'50s. Co-scripted by the popular crime writer Auguste Le Breton (Rififi), this is a story of ex-bank robber and compulsive gambler Bob (Roger Duchesne), who plans a heist at the Deauville casino. As in many films of that genre, he assembles a team of old friends and new acquaintances to do the job and is determined to perform it despite all the odds that continue to pile up before him. The overall tone is admirably lighthearted, however, and despite many stylistic and thematic references to American caper movies, the whole enterprise remains genuinely French. "This is a kind of film that we want to make!" exclaimed the young and rebellious François Truffaut back in 1955. Jean-Luc Godard, in his turn, acknowledged Melville's influence, giving him an extended cameo in Breathless. ~ Yuri German, Rovi

This light, breezy 1955 heist film is probably the least characteristic movie Jean-Pierre Melville ever made.

Lagging direction, so-so thesping and usual femme and lowdown aspects of this type production make this an ordinary entry.

A wonderful movie with all the formal beauty, finesse and treacherous allure of green baize.

Its realism is not the reality of life, but of the kind of movies that give shape to the disordered lives of the people who watch movies.

Bob le Flambeur (1955) has a good claim to be the first film of the French New Wave.

Melville's actually more interested in his central character's gentlemanly heroics and fractured obsession with risking everything at the roulette table.

Bob is the perfect Jean-Pierre Melville hero...and Bob le flambeur (Bob the gambler) is about as characteristic a Melville movie as you'll ever see.

Melville and his characters were wont to mutter sour-sweet epigrams about trust and loyalty, like "If there are two of you, one will betray." ... Nobody's perfect; this curtain line is. The lasting beauty is plain to see.

Melville at his best

At once a charming entertainment, a resonant character study, an ironic morality tale, and a bittersweet celebration of Montmartre.

The ending is pure comedy - adore!

another genius film directed by melville. the cast, camera work, and script were near perfect and the story was inventive and compelling. i was ready to give this a perfect score and declare it one of my favorite films of all time until an unfortunate final 5 minutes of the film that completely spit in the face of logic and common sense, but when an entire film is near flawless and the climax doesnt work out well the film still deserves respect. despite the empty ending this is a wonderful and excellent film.

another great heist film from jean pierre melville, once again showing his love for american noir and gangster movies. the title character is a kind, aging thief and degenerate gambler who plans one last elaborate job, the robbery of the deauville casino. of course everything doesn't go off as planned. an important precursor of french new wave and a very obvious influence on ocean's eleven. remade by neil jordan as the good thief, 2003

I liked THE GOOD THIEF more.