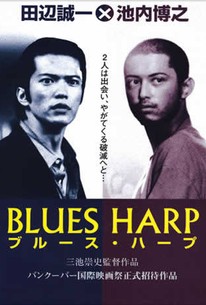 The prolific Takashi Miike directed this Japanese crime drama that is set at the same U.S. military base at Yokosuka seen in Shohei Imamura's Pigs and Battleships (1961), yet takes a tour of the Okinawan underground youth culture. Bi-racial bartender Chuji (Tanabe Seichi), son of an Okinawan mother and a black American GI, moves into a music career after a record executive hears his dynamic blues harmonica playing. When young yakuza Kenji (Ikeuchi Hiroyuki) collapses in the alley behind the nightclub where Chuji works, his life is saved by Chuji's girlfriend, a veteran's assistant. It's the beginning of a dangerous association, as the gangster introduces the bluesman to another way of life -- and soon trouble erupts. Shown at the 1998 Vancouver Film Festival. ~ Bhob Stewart, Rovi

There are no critic reviews yet for Blues Harp. Keep checking Rotten Tomatoes for updates!

Another proof of Miike's greatness, a generic plot that becomes very much alive thanks to it's characters. The man once more focus his attention on people that are outsiders to society, or that are struggling to find focus in their lives. The plot is wisely trown to a side to let the characters breathe and trap the viewer. Very good casting too. Just go and watch this, right now.