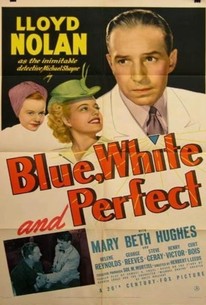 This patriotic detective program revolves around diamonds. They are being smuggled out of the United States for use in the Japanese war effort. An American detective catches on to the scam and foils the spies.

There are no critic reviews yet for Blue, White and Perfect. Keep checking Rotten Tomatoes for updates!

The Michael Shayne series was a great gig for Lloyd Nolan as he didn't get to play many leads. "Blue, White, and Perfect" from 1942 is a fun entry into the series, and for us boomers, another chance to see George Reeves without his Superman cape. The film also features Helene Reynolds and Mary Beth Hughes. In this one, Shayne takes a job as a riveter, at first to watch for sabotage, but after a robbery of industrial diamonds, to ferret out the criminal. Actually the job is a great cover as his fiancée, Merle, is pressuring him to get out of the detective business. The trail leads to Hawaii. Since this film was released in January of 1942, it looks like it was filmed before Pearl Harbor, so the placement of the story in Hawaii is interesting, plus the fact that we seem to be on the trail of not Japanese, but Nazis. In order to get money for passage on the ship, Shayne convinces Merle to make a $1000 deposit on a ranch. Clever if low! On the ship, he meets Juan Arturo O'Hara (Reeves) and an old client, Helen Shaw, who now owns a dress shop in Hawaii. It gets pretty dicey from there as someone tries to kill Shayne, by not only shooting, but drowning! Director Herbert Leeds keeps the action going at a snappy pace. Highly entertaining, with a lively performance by Nolan, and a charming one by Reeves (Superman), whose career never regained its momentum after his war service. 4 Stars 1-16-13