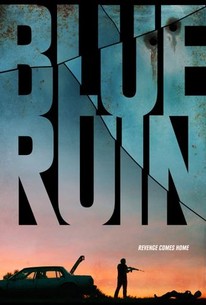 Critics Consensus: Smart, stripped-down, and thrillingly grim, Blue Ruin proves that a well-told revenge story can still leave its audience on the edge of their seat.

Critics Consensus: Smart, stripped-down, and thrillingly grim, Blue Ruin proves that a well-told revenge story can still leave its audience on the edge of their seat.

Critic Consensus: Smart, stripped-down, and thrillingly grim, Blue Ruin proves that a well-told revenge story can still leave its audience on the edge of their seat.

BLUE RUIN is a classic American revenge story that recently won the FIPRESCI International Critics Prize at the Cannes Film Festival where it screened in the Directors' Fortnight. The film follows a mysterious outsider whose quiet life is turned upside down when he returns to his childhood home to carry out an act of vengeance. Proving himself an amateur assassin, he winds up in a brutal fight to protect his estranged family. (c) Radius-TWC

Captain America: Civil War and The Conjuring 2 Available to Stream This Week
Best Reviewed Movies by Genre 2014
Best Movies Off the Radar 2014

The world doesn't need another empty genre exercise. But as Blue Ruin reminds us, it can always use more filmmakers of Saulnier's resourcefulness, sensitivity and quiet assurance.

With the same brand of realist irony the Coens used to cool down Blood Simple, writer-director Jeremy Saulnier slows the genre's heartbeat to gripping effect.

Blue Ruin starts promisingly with a hairy hobo living in a blue, rusty, bullet-holed Pontiac on a Delaware beach.

Saulnier is also a cinematographer, and he's in complete control of the film's conflation of human-scale horror and tragicomedy.

Blair, an unheralded actor, carries the whole picture. He's in practically every scene, and his performance is fascinating because in his eyes you can see the character struggling desperately with himself.

Saulnier makes impressive use of silence and slow camera movements, allowing the suspense to simmer until violence seems practically inevitable.

Blue Ruin is not a truly organic story in terms of originality, but its brutal take on revenge and [Macon] Blair's mesmerising performance makes it one of the year's best films that no-one will have heard of.

For all its chilling realism, Blue Ruin collapses as it tries to fight against the inevitability of its genre and its inability to rise above that predestined path.

Rather than give away its sparse elements, I'd rather tell you it's beautifully paced, and filled with foreboding; Blue Ruin is a testament to the effectiveness of great acting and direction.

Blue Ruin is a great low-budget thriller with an original voice and strong, realistic performances.

Despite a plot hole in the otherwise well-plotted and enticing thriller, it's an ace calling card for its director and lead actor.

Saulnier has created a very brutal, raw image of the revenge thriller. He takes it out of the ridiculousness of Hollywood and how big budget films treat the sub-genre.

Unlike the typical revenge tale wherein the hero is sure handed, surefooted and sureheaded, this story leans into the possibility that our grim revenger might not have it all together in any way, shape or form. And yet ... Good moviemaking all around. Get in for the antithesis of Charles Bronson and one nerve wracking ride. Good stuff.

A visceral revenge story whose nerve-wracking tension is combined so well with a dark sense of humor as it follows the inept (and sometimes hilarious) efforts of its amateur protagonist, moving in a deliberate, slow-burning pace towards a lacerating conclusion.

There's nothing better than a revenge fantasy film. Tarantino is possibly the most famous, recent, purveyor of this genre with his revival of grindhouse and exploitation films, but "Blue Ruin" is its own strange, gothic ride through Southern crime. Read more at http://www.bluefairyblog.com/new-blog-1/2015/3/26/blue-ruin

Writer/director Jeremy Saulnier understands the viewer should sympathize with the "hero" in order for us to be invested in his plight. You can appreciate Dwight's emotionally damaged vagabond. I'm not so sure we should be rooting for him, but we do. He has suffered deeply. Now he is tormented by deep sorrow and so he has our sympathy. Yet his quest is made more captivating in the way it's told, giving the audience pieces to make us root for the protagonist without really knowing everything. Even by the end, we never really know the complete story, just enough to understand what's happening in the moment. Bursts of violence are used. Blue Ruin occasionally falls victim to excess. More restraint in the bloodshed department would've been appreciated. An extended scene where Macon digs an arrow out of his leg is gratuitous in its desire to shock. Storytelling is a craft. Blue Ruin does indeed have an artistic way of telling an uncomplicated tale. It doesn't revolutionize the genre. It's a simple saga, artfully told. fastfilmreviews.com