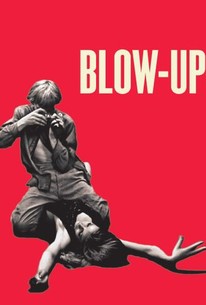 Critics Consensus: Exquisitely shot and simmering with unease, Michelangelo Antonio's Blow-Up is an enigma that invites audiences to luxuriate in the sensual atmosphere of 1960s London chic.

Critics Consensus: Exquisitely shot and simmering with unease, Michelangelo Antonio's Blow-Up is an enigma that invites audiences to luxuriate in the sensual atmosphere of 1960s London chic.

Critic Consensus: Exquisitely shot and simmering with unease, Michelangelo Antonio's Blow-Up is an enigma that invites audiences to luxuriate in the sensual atmosphere of 1960s London chic.

Italian director Michelangelo Antonioni's first English-language production was also his only box office hit, widely considered one of the seminal films of the 1960s. Thomas (David Hemmings) is a nihilistic, wealthy fashion photographer in mod "Swinging London." Filled with ennui, bored with his "fab" but oddly-lifeless existence of casual sex and drug use, Thomas comes alive when he wanders through a park, stops to take pictures of a couple embracing, and upon developing the images, believes that he has photographed a murder. Pursued by Jane (Vanessa Redgrave), the woman who is in the photos, Thomas pretends to give her the pictures, but in reality, he passes off a different roll of film to her. Thomas returns to the park and discovers that there is, indeed, a dead body lying in the shrubbery: the gray-haired man who was embracing Jane. Has she murdered him, or does Thomas' photo reveal a man with a gun hiding nearby? Antonioni's thriller is a puzzling, existential, adroitly-assembled masterpiece. ~ Karl Williams, Rovi

Jane Birkin
as The Blonde

Gillian Hills
as The Brunette

Veruschka von Lehndorff
as Herself

Jimmy Page
as Himself with The Yardbirds

Jeff Beck
as Himself

Chris Dreja
as Himself

On DVD This Week: Fantastic Beasts and Where to Find Them, Silence, Planet Earth II, and More
Five Favorite Films with John Carpenter
Remembering Michelangelo Antonioni

I always liked to think that even the worst film by Antonioni would be better than the best by almost any other director. Now I know that this is so, because I've just seen his worst film, and I was right: Blow-up is still an absolute must.

A prize '60s artifact, Michelangelo Antonioni's what-is-truth? meditation on Swinging London is a movie to appreciate -- if not ponder.

In Blow-Up [Antonioni] smothers this conflict in the kind of pompous platitudes the press loves to designate as proper to "mature," "adult," "sober" art.

This is so ravishing to look at (the colors all seem newly minted) and pleasurable to follow (the enigmas are usually more teasing than worrying) that you're likely to excuse the metaphysical pretensions.

There may be some meaning, some commentary about life being a game, beyond what remains locked in the mind of film's creator, Italian director-writer Michelangelo Antonioni. But it is doubtful that the general public will get the 'message' of this film.

As often with Antonioni, a film riddled with moments of brilliance and scuppered by infuriating pretensions.

a quest for hidden meaning amid all the artifice and emptiness of Swinging London.

As usual, Antonioni's images have a seductive loveliness. No fashion photographer ever took more glamorous shots, or made London look more inviting.

Michelangelo Antonioni's film is an inquiry into the modernist concern of what art is and how it affects life.

At once provocative and mystifying, dazzlingly immersive and utterly remarkable.

This remains a failure for which I would trade ten successes: a totally absorbing experience on the screen, a film of deceptive, tricky surfaces and cold perceptions.

Michelangelo Antonioni's first English language film is an allegorical murder mystery whose abstract parameters delineate a society where images are more important, and lasting, than reality.

Antonioni shows a wonderful eye for colors, shapes and stunning compositions, relying mostly on David Hemmings' impeccable performance and Carlo di Palma's exceptional cinematography to dissolve the limits between reality and our perception of it.

A well to-do artist finds that being well to-do doesn't forego the suffering latent in the job description: there are endless streams of pretty young things to despoil("they don't leave me alone!"), the unruly lower classes ("they can't get anything right!"), and maybe there was that murder he filmed in the park yesterday ... Antonioni musings on the act of artistic creation are similar to Frankenstein wherein what was formed might come back to kill you. The cast is very good, and the filming astounding for its time period. The 60's come off looking better than perhaps in any other film. Swinging London before Austin Powers laffed at it.

A lot of people say that this is Michelangelo Antonioni's best movie and also far superior to Brian DePalma's semi re-imagining. I would have to say that I disagree severely on both accounts. While this has an interesting basic concept and some of those great longshots that Antonioni is famous for, the overall execution and plot doesn't really go anywhere and the characters are anything but interesting to watch. If you love sleazy/cocky British photographers, then you'd be in heaven. However, I found no interest in his conflict. I would say that by far my favorite part about the movie is the fact that you see the attempted murder without even knowing you do, that is pretty clever. Now Brian DePalma took this idea and perfected it, while also putting his spin on it. Blow Out is by far the better work here in just about every way possible. Better acting and characters, imagery and shot technique that is completely revolutionary and memorable to say the least, but most importantly it has one of the greatest plot structures of any thriller. This movie is all over the place and ultimately blocks itself in.

There is this one camera sequence that I love. Towards the end of the film the David Hemmings character goes back to the park to find the body gone. From his knees he looks up to the rustling leaves and the camera cuts to a shot of the leaves, apparently from his perspective but then the camera slowly pans down to Hemmings now standing in completely different spot. Gives me the willies every time.