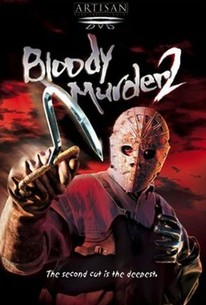 Five years have passed since notorious serial killer Trevor Moorhouse's bloody killing spree at Camp Placid Pines, and despite the fact that her brother Jason had previously fallen victim to the masked killer, Tracy (Katy Woodruff) has decided to follow in her brother's footsteps in becoming a camp counselor. As the campers board their buses for home and the counselors prepare to close-up camp for the summer, the terrifying nightmares that have plagued Tracy begin to bleed into reality as a dark entity begins picking off the hapless teens one by one.

A decent yet otherwise undistinguishable low-budget Friday the 13th rip-off.

Know as Halloween camp in th UK. A Friday the 13th rip off, good for a low budget slasher but very gory for a 15!

Better than your average indie low-budget slasher. There's nothing remarkable or ground breaking about it, but it delivers what's required of this sleazy sub-genre - good gore, some raunchiness, and a good 'whodunnit' plot. Really good location too which is what make summer camp slashers a particular favourite of mine. It unashamedly rips off the likes of "Friday the 13th" but it delivers the goods.

The second cut is the deepest.

Remember when you could go to a slasher movie, certain that it was going to suck, but still secure in the knowledge that you'd get to see some boobs? What happened to those days?