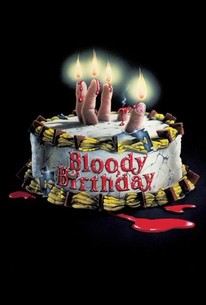 Since these three ten-year-olds were born at the same time during a lunar eclipse, they naturally have murderous tendencies, killing and terrorizing everyone who may or may not have ticked them off. This horror feature was filmed in 1980.

Sylvia Wright
as Girl in Van

John Avery
as Boy in Van

It's dazzling the way the film cleverly portrays childlike innocence to draw viewers into a false state of security, while then, when they least expect it, revealing the characters' lack of conscience.

Doesn't concoct an elaborate back story or history of family dysfunction to justify or motivate the kiddie killing spree that is its reason for being. The three bad seeds here were simply born under a bad sign, as Albert King might have said.

A time-waster tasteless horror flick, with no redeeming social values.

What the film lacks in story it makes up for with a high body count and plenty of gratuitous sex.

I have to be honest here. I barely got through this pile of junk and I was thrilled when it was over. I am by no means a fan of movies where children are the killer. There are probably exceptions to that rule, but for the most part, I just dislike them. Not because I think they're immoral or that it's a bad idea, but I just find child actors annoying, and they were never more annoying than they were in the atrocious 80's shocker Bloody Birthday. People like to label this as a slasher, and I have to disagree with that title. It's not a slasher. Hell, one of the kids runs around in the movie with a gun and shoots his victims with no sense of subterfuge at all, either by the character, the actor or the director. It's a mess, and the only redeeming quality about the movie is Julie Brown's breasts, which are one of the best pairs you're ever likely to see in one of these movies. That's about its only saving grace. Otherwise, it's a skippable exercise in movie futility.

Three 10 year-old kids all born on the same day during a solar eclipse go on a killing-spree around their neighbourhood. Dosen't quite live up to the title as the kills are pretty tame, though the fact they're being carried out by children adds a disturbing quality to them. And the actors playing the brattish murderous trio do a splendid job and you'll learn to loathe them before the end is out. It's a good fun slasher overall, nicely paced too and complete with a bunch of nudity and reasonably high body-count for a killer-kid movie.

In the early 80's there was a plateau of endless slasher films. Some were forgotten such as this one. Bloody Birthday is an obscured title that every Slasher film fan should check out. Three kids born on the same night during a Lunar Eclipse have homicidal tendencies on their tenth birthday and start killing people. The film is one of those horror films that you are thankful that it's been unearth. Bloody Birthday doesn't do anything terrific, but it is definitely a thrilling gem. The film is of course famous for the fact that it's a "killer kids" movie and generated lots of controversy when it was released. Bloody Birthday has genuine tense moments, but at times the film suffers from being a bit corny. For what its worth, Bloody Birthday is a good Slasher film that if you're a fan of the genre, you should definitely check out. The story is interesting and the kids are evil. This is an imperfect Slasher film, but it manages at being an entertaining one despite the fact it doesn't do any new creative wise. For what it is, Bloody Birthday is a fun, disturbing Horror film that definitely will make anyone uneasy. The kills are creative, which makes up for the somewhat lacking storyline. But overall, Bloody Birthday is a well executed Horror film that will please almost every horror fan.

First of all, the plot doesn't make much sense, I mean just because they share a birthday they don't have any emotions? That's silly. Other than that, it's a suspenseful and somewhat shocking horror movie, and it's entertaining.