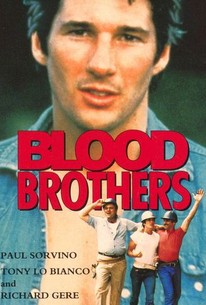 Bloodbrothers, a slice-of-life study of the emotional upheavals of the Italian-American De Coco family in the Bronx, wears its heart on its blue-collar, with Tony Lo Bianco as the macho hard-hat father and Paul Sorvino as the florid Italian uncle. Richard Gere is the softy son of Lo Bianco who doesn't want to continue the family tradition of working as a construction laborer. Instead, he'd rather work in a hospital ward and take care of sick children. And as beer bottles smash against the sidewalk, women throw themselves at the sweaty he-men, and fights break out around the block, Gere must decide whether he's mender of buildings or children.

Danny Aiello
as Artie
View All

This fantasy saga of a rant-and-roll working-class Bronx Italian family, although shot in New York, is riddled with Hollywood conventions.

A hard-hitting drama about one nineteen-year-old Bronx's youth coming of age.

There are no featured audience reviews yet. Click the link below to see what others say about Bloodbrothers!