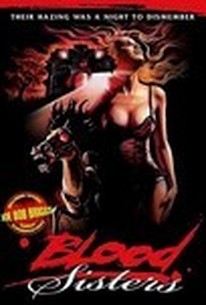 This muddled low-budget slasher film from notorious exploitation hack Roberta Findlay (Snuff) involves the plight of several sorority pledges who are forced to spend their "Hell Night" initiation in an abandoned bordello which is reputed to be haunted. Their activities include a scavenger hunt, which of course provides the opportunity to poke around the house's many creepy corridors and rooms for what seems like eternity. During their explorations, they are each visited by apparitions which seem to be emerging from various mirrors and are stalked by a shadowy, lingerie-clad nemesis who begins hacking the pretty coeds to bits. Pretty tedious stuff, even for Findlay. Also known by its original title Slash.

Mikhail Druhan
as Edna The Prostitute

Pam La Testa
as The Madame

Michael Tilton
as The John

Shannon McMahon
as Alice
View All

There are no critic reviews yet for Blood Sisters. Keep checking Rotten Tomatoes for updates!

Although I liked the ending, this movie meandered quite a bit, and got really boring from time to time. The characters were especially dull, the actors were horrible. If they had a better cast and some more gore, this could have been a good movie.