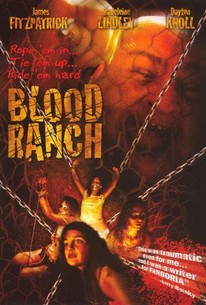 In the stomach-turning tradition of The Texas Chainsaw Massacre, Hostel, and Jeepers Creepers comes the direct-to-video slasherfest Blood Ranch, starring James Fitzpatrick, Madeleine Lindley, Dayton Knoll, and Daniel O'Meara. A group of co-eds on a cross-country desert journey save a young woman from an imposing black van. Shortly afterward, their car mysteriously breaks down and they are forced to seek asylum at a nearby ranch. Little do they realize that it houses denizens of "The Web" -- a twisted allegiance of psychopaths, sexual predators, and mentally impaired subhuman maniacs who devote their lives to finding unsuspecting young men and women to systematically imprison, torture, and dismember. Their latest captors will be forced to claw their way out in a bloody battle to the death -- if they hope to ever see the outside world again. Corbin Timbrook directs, from a script by Antonio Hernandez.

There are no critic reviews yet for Blood Ranch. Keep checking Rotten Tomatoes for updates!

Lame movie. A real disappointment since it started out with potential. Some twisted scenes and gratuitous gore could well have saved it.

Lame. How dare they title this film "Blood Ranch" - there was hardly any blood in it!! This movie was all bark and no bite. A real disappointment since it started out with potential. Some twisted scenes and gratuitous gore could well have saved it.