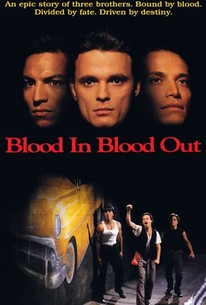 Blood In, Blood Out (Bound by Honor) Photos

Taylor Hackford directed this urgent melodrama about the realities of street crime, gangs, and prison life among the Chicanos of East Los Angeles. Miklo (Damian Chapa), Paco (Benjamin Bratt) and Cruz (Jesse Borrego) are three friends who are living in the East Los Angeles of 1972 as it is torn apart by violence. When the gang violence hits the three friends, they are affected by their participation in the bitter violence in different ways. Cruz, an artist, becomes crippled, and he sinks deeply into drug addiction. Paco, an accessory to murder, joins the military to avoid jail time, leading to a spot on the LAPD. Miklo, the kid with the gun, is sent to jail, where he slowly rises up in the ranks of La Onda, the San Quentin Latino gang. ~ Paul Brenner, Rovi

Critic Reviews for Blood In, Blood Out (Bound by Honor)

Bound by Honor contains some effective performances, some moments of deeply felt truth, and a portrait of prison life that I assume is accurate. What seems to be missing is a clear idea of why the movie was made.

When mainstream Hollywood tackles Hispanic-themed movies, such as this one, the results are usually disastrous. Though aiming at creating an authentic Hispanic street epic, the otherwise reliable Hackford has directed a diffues and cliche picture.

Long, ambitious and uneven, but an interesting project.

Flawed and perhaps a tad overlong, but pretty gripping all the same.

Audience Reviews for Blood In, Blood Out (Bound by Honor)

Loved it...because I lived it.

I viewed this movie because it got such terrific ratings. However, it was probably one of the stupidest movies I have ever seen. The acting, or should I say "over" acting, was ridiculous. I don't know what bothered me more: the fake Mexican accents, or the crazy way the actors flung themselves around while speaking. The "gangster talk" was just ridiculous, with too much"orale", too much, "hey vato". The worst dialogue ever... Maybe this was considered a good movie 20 years ago??

Like a Lifetime Original Movie version of American Me with a cast of actors leftover from the auditions.

Recently viewed this film which was called, "Blood In Blood Out" and could hardly believe the great details and realistic way this film was produced. There is no doubt that it showed what Prison Life really is like among all races, Black, Brown, White and many more and how each group has to struggle to exist and at the same time have fun, make money and kill each other. If you wanted sex in prison, you had plenty of willing partners and it just might be a very difficult and hard way to deal with it, or just simply getting raped when you least expect it. A young guy gets out of jail and tries to go down the straight and narrow path and winds up losing a body part and is constantly trying to become a gang member. There is a guy who has a great ability of being an artist, drawing great paintings and he gets cut up and his back twisted like a pretzel. If you want to go to prison, watch this film and it just might change your mind completely. Plenty of action and it goes none stop through out the entire picture.

Blood In, Blood Out (Bound by Honor) Quotes