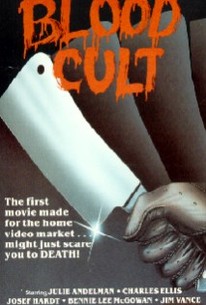 This bargain-basement slasher film from Oklahoma was shot entirely on video -- a format trumpeted proudly on the cassette sleeve, but definitely nothing to be proud of -- which manages to accentuate the uncomfortable sleaziness of the proceedings. The plot involves a secret society of creeps who gather regularly in ceremonial garb to worship the god "Canis" and offer the occasional human sacrifice in his honor. Their right to dismember is eventually challenged by a bookish hero and a pudgy heroine, who spend most of their time standing around talking while the wacky Canis cultists continue to slash, hack and saw away at the coeds of a small Midwestern college. The prototype of a short-lived series of shot-on-tape horror features for the early home-video market, this should have been plain evidence that the format was ill-suited to feature-length projects. The acting is of the high school Drama Club variety at best, and the underlit videography gives the impression of deranged home movies from a vacation to hell. Followed by a marginally more competent sequel, Revenge, which features a cameo from John Carradine.

Think of the worst horror movie you've ever seen, but don't say it out loud. Got it? Good. Blood Cult is worse.

There are no featured audience reviews yet. Click the link below to see what others say about Blood Cult!