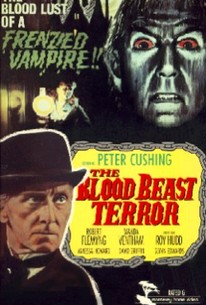 Set during the Victorian era, the film stars Peter Cushing as a Holmeslike detective on the trail of a serial killer. The mystery angle is minimal, since we know virtually from the beginning that the killer is a gigantic....moth! It seems that Wanda Ventham, daughter of addled scientist Robert Flemyng, has spent too much time in her dad's lab, and can turn herself into a malevolent moth at will. Flemyng tries to mollify Ventham by creating a playmate for her-and the result is two murderous moths. Blood Beast Terror was also released as The Vampire-Beast Craves Blood.

Robin Wentworth
as Starkadder
View All

There are no critic reviews yet for Blood Beast Terror. Keep checking Rotten Tomatoes for updates!

There are no featured audience reviews yet. Click the link below to see what others say about Blood Beast Terror!