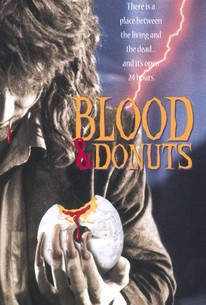 Most people prefer coffee with their pastry, but then, most people aren't Canadian vampires trapped in an all-night donut shop. The aforementioned bloodsucker is Boya, who has spent the past 26 years safely wrapped up and sleeping inside a garbage bag. Someone accidentally wakes him up and Boya groggily falls into Earl's cab and finds himself a cheap hotel across from Bernie's Doughnut Shop, Earl's favorite haunt. Earl has the hots for waitress Molly. Meanwhile, Boya struggles to find himself a bite to eat. While pursuing a rat, he inadvertently saves Earl from muggers. Later, his old girlfriend shows up. She is terribly angry because Boya refused to make her a vampire, too.

There are no critic reviews yet for Blood & Donuts. Keep checking Rotten Tomatoes for updates!

Pretty decent if you like vamps, it has an interesting take on them.