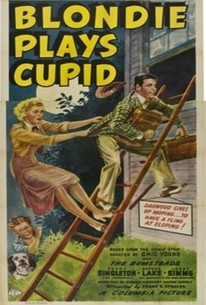 The Bumstead family-Blondie (Penny Singleton), Dagwood (Arthur Lake) and Baby Dumpling (Larry Simms)-embark on a long-delayed vacation in this series entry. While en route to their out-of-town relatives, the Bumsteads are forced to make an emergency stopover in a small town, where they get mixed up in an elopement. By the time Dagwood is through offering his well-intentioned assistance, the elopers are on the verge of a breakup, but Blondie (per the film's title) manages to smooth things out. Blondie Plays Cupid is distinguished by the appearance of Glenn Ford as flustered groom-to-be Charlie (the bride-to-be is Columbia contractee Luana Walters, who later played the title character's mother in the 1948 serial The Adventures of Superman).

Will Wright
as Tucker

Daisy the Dog
as Himself

Rex Moore
as Newsboy
View All

There are no critic reviews yet for Blondie Plays Cupid. Keep checking Rotten Tomatoes for updates!

There are no featured audience reviews yet. Click the link below to see what others say about Blondie Plays Cupid!