Blondie of the Follies1932 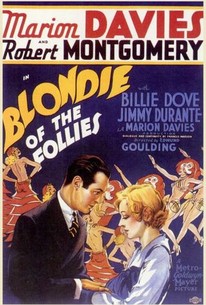 Blondie of the Follies Photos

Marion Davies and Billie Dove, both veterans of the real-life Ziegfeld Follies, star in the entertaining comedy-drama Blondie of the Follies. Having both grown up in the New York tenement district, Blondie (Davies) and Lurleen (Dove) hope to escape their shabby surroundings in favor of the show-business world. But while Lurleen takes "the easiest path," sleeping her way to the top and living in luxury as the kept woman of playboy Robert Montgomery, Blondie does her best to hold on to her virtue while climbing the rungs of fame and fortune. The rivalry between the two girls reaches a fever pitch when Lurleen inadvertently causes Blondie to suffer a debilitating injury during a particularly treacherous Follies production number. Sticking fast to her principles, Blondie ultimately wins Montgomery, whereupon she and Lurleen renew their rocky friendship. The film's highlight is a delightful party scene in which Marion Davies and Jimmy Durante perform a devastating send-up of Greta Garbo and John Barrymore in Grand Hotel. Blondie of the Follies might have even been better had it been shorter; at 90 minutes, however, it veers towards repetition and predictability in the final reels. ~ Hal Erickson, Rovi

Clyde Cook
as Dancer
View All

Critic Reviews for Blondie of the Follies

Dressier for a slapstick comedy, [Marion Davies] might find that her real gift for mimicry would be received far more enthusiastically than her propensity for "dressing up" in boys' pants and acting coy

There are no featured reviews for Blondie of the Follies at this time.

Blondie of the Follies Quotes