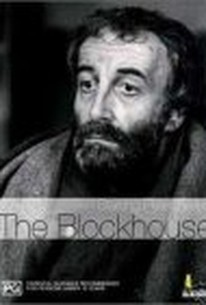 Set during World War 2, The Blockhouse takes place virtually in its entirety in an underground German blockhouse. Six men of wildly varying nationalities and walks of life are trapped in the blockhouse-and remain so for over six years. Though their prison is well stocked with food and beverages, the mortality rate is appalling, the victims dying more from loneliness and fear than anything else. Intriguingly, Peter Sellers is cast as a Frenchman, while French singer/actor Charles Aznavour plays an Italian! The Blockhouse was based on a novel by Jean Paul Ciebert-which, incredibly, was inspired by a true story. ~ Hal Erickson, Rovi

Per Oscarsson
as Lund

Leon Lissek
as Kozhek
View All

Critic Reviews for The Blockhouse

There are no critic reviews yet for The Blockhouse. Keep checking Rotten Tomatoes for updates!

Audience Reviews for The Blockhouse

Haunting.Well,it can't get any worse for these chaps.A true story doesn't need to grab you from the soul,these lost workers suffer from the pathetic results of war.The film clearly shows their desperation time after time.And their imminent entrapment.