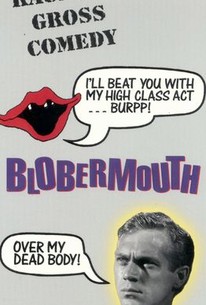 The original Blob was a good-hearted romp of a horror movie: even quite young children are unlikely to have found it threatening. Following in the footsteps of Woody Allen, the makes of the current film have secured rights to the original film and have re-dubbed the dialogue. In the new story, the Steve McQueen character is an aspiring stand-up comic whose career is threatened by the Henny Youngman-esque one-liners of the Blob. This was part of a regional television project by an L.A. comedy group, the L.A. Connection called Mad Movies. The best thing one movie-trade reviewer (for "Variety") could say for the remake is that the new dialogue "generally is matched to lip movements."

There are no critic reviews yet for Blobermouth. Keep checking Rotten Tomatoes for updates!

There are no featured audience reviews yet. Click the link below to see what others say about Blobermouth!