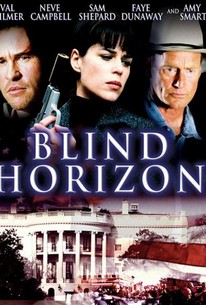 A man with no memory struggles to make sense of the troubling details that are still stuck in his mind in this psychological thriller. Frank (Val Kilmer) wakes up in a small town in the New Mexico desert with a severe head wound and most of his memory wiped away. However, Frank is somehow convinced that someone is planning to assassinate the President of the United States, and that Chloe (Neve Campbell), the woman who is claiming to be his girlfriend, is some sort of imposter. When Frank learns that the president is indeed passing through town that day, he tries to warn Sheriff Kolb (Sam Shepard) that something sinister if afoot; as it happens, Kolb believes him, though he's more than a bit busy dealing with a hard-fought election campaign against former Deputy Cash (Noble Willingham). Blind Horizon was screened at the 2004 South by Southwest Film Festival.

Stephen 'Steve-O' Glover
as Man with Hat in Final Scene

A mesmerising jigsaw mystery with a story that keeps you glued to the end. Swimming in the same waters as "Memento".

Michael Haussman's over-directed conspiracy thriller takes place in a small desert town in New Mexico and recalls a bad episode of The X-Files.

The story itself is very cool and keeps you guessing until the surprising end.

Pretty decent for an indie film. The cast all do a pretty good job, and the story (although derivative), was captivating and intriguiging due to the way it was edited/unfolded. Not the best film, but still quite interesting and intriguing, and worth a look.

Typical assacination plot. Someone has to die, right.