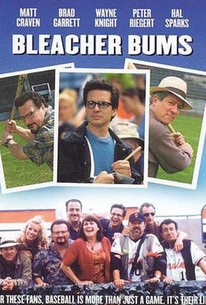 There are people who like to watch a ball game every once in a while, and then there are baseball fans, individuals of rare dedication whose passion for their favorite team defies conventional logic, and this comedy-drama follows a group of fans whose devotion to their hometown heroes is rarely tainted by the fact they almost never win. It's a typical summer afternoon, and a group of fans are watching the Chicago Bruins play a typically lamentable game from the cheapest seats in the stadium. Decker (Peter Reigert) is the owner of a hardware store who is playing hooky to watch the game. Marvin (Brad Garrett) and Zig (Wayne Knight) are compulsive gamblers who will bet on anything -- even the hapless Bruins. Richie (Hal Sparks) is a loyal Bruins booster who probably knows more about the team than the players do. Melody (Sarain Boylan) is a sexy fan who likes going to the game, getting some sun, and showing off her figure. And Greg (Matt Craven) likes to follow the game, even if he can't see the players -- he's blind. Bleacher Bums was based on a long-running stage play created by Chicago's Organic Theater Company; Joe Mantegna and Dennis Franz were among the actors who wrote and performed the play in its original incarnation, and Stuart Gordon, who went on as a filmmaker, also contributed to the script, as well as directing the premier production. This film adaptation of Bleacher Bums was produced for the Showtime premium cable network, where it premiered in the spring of 2002. Incidentally, in the stage version of Bleacher Bums, the baseball team in question was the Chicago Cubs, but the team and Major League Baseball refused to give the producers of the film permission to mention the Cubs in this adaptation.

Maury Chaykin
as Scorekeeper No. 2

Charles Durning
as Scorekeeper No. 1

Stephen Markle
as The Cheerleader

Mary Walsh
as Rose
View All

There are no critic reviews yet for Bleacher Bums. Keep checking Rotten Tomatoes for updates!

There are no featured audience reviews yet. Click the link below to see what others say about Bleacher Bums!