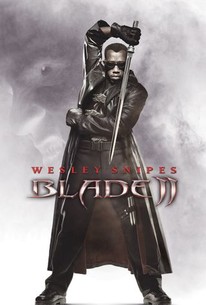 Critics Consensus: Though Blade II offers more of what worked in the original, its plot and character development appear to have been left on the cutting room floor.

Critics Consensus: Though Blade II offers more of what worked in the original, its plot and character development appear to have been left on the cutting room floor.

Critic Consensus: Though Blade II offers more of what worked in the original, its plot and character development appear to have been left on the cutting room floor.

Four years after scoring a box-office touchdown with Blade (1998), actor Wesley Snipes returns to portray the Marvel Comics character again in this sequel that teams him with Mexican horror director Guillermo del Toro. A half-vampire, half-human hybrid, Blade (Snipes) is a merciless vampire hunter bent on destroying the bloodsuckers that feed on humanity. The keys to Blade's success are a serum that allows him to resist the urge for blood and an array of inventive, deadly weapons, both of which were once supplied by his mentor, Whistler (Kris Kristofferson). Since Whistler's death, Blade has relocated to Prague and recruited the pot-smoking slacker Scud (Norman Reedus) to take the place of his father figure, but then he discovers that Whistler's not dead after all: He's been infected with the vampire virus. Reunited with Whistler, Blade is dealt an even bigger surprise: His greatest enemy, vampire leader Damaskinos (Thomas Kretschmann), wants to make peace with him. It seems that the vampires are facing a greater threat than Blade and hope to persuade him to fight the Reapers, a mutated super-race of vampires on a rampage of murder, indiscriminately killing both humans and their fellow bloodsuckers while sucking their victims dry. Blade agrees to a truce and joins the Bloodpack, an elite squad of commandos originally formed to fight Blade himself. Soon, the vampire soldiers discover that the virus responsible for creating their enemies is spreading rapidly and can be traced back to a mysterious "Patient Zero." Blade 2 (2002) co-stars Ron Perlman, Leonor Varela, Donnie Yen, and Matt Schulze. ~ Karl Williams, Rovi

Jan Malik
as Reaper
View All

There's no script to speak of, but del Toro devises every battle to wow even the most jaded martial-arts mavens; the dissolutions and implosions are beautiful.

It is directed by Guillermo del Toro: by "directed" I simply mean he turned his camerawork over to the computer graphics surgeons who cut, slice, dice and vivisect the material to mount a gross eyeassault of CG sequences.

Del Toro is a stylish horrormeister, and he has created an evocative, foreboding atmosphere. But only a fan of this kind of mayhem could find a way into the story. And only a critic, sworn to serve, could stick it out to the end.

No one seems to be having much fun, with the possible exception of Kris Kristofferson, who is back as Blade's venerable human sidekick, Whistler. The film finds few variations on the themes of run, kick, chomp and gulp.

The world can always use another entertainingly trashy B-movie, and Blade II fits the bill.

Blade II is a better vampire movie than recent entries such as Queen of the Damned or Dracula 2000. That said, Wesley Snipes' return as slayer of the undead still is fairly anemic.

Blade II is an incredibly upbeat picture, and rather than focus on Blade's loneliness or how he's humanity's protector and yet can never truly be one of them, del Toro gleefully jumps into the action scenes.

The best installment of the saga and one of the clearest examples of the splendid handling of the cinematographic narrative treasured by the Mexican filmmaker. [Full Review in Spanish]

Blade, the protagonist of Blade II, takes his blade and shampoo factory to Prague, where many a super vampire are blade adieu.

Basically, the sequel replays the original movie's set pieces with even more gore and less coherence.

Blade II is certainly not without interest... But mostly, it looks and feels so much like a video game that some members of the audience will feel their thumbs twitching before the final reel.

While the action delivers and the special effects are decent for their time, the ensemble of characters consists merely of caricatures, prancing through the gloomy scenery in a contest of who acts the coolest. That's as shallow and silly as it is entertaining.

Wesley Snipes once again dons the leather overcoat, this time to join forces with an elite vampire unit to combat a race of Nosferatu-like zombie vampire hybrids who threaten to over-run both races. Blade II is essentially the vampire film's answer to Aliens with the high-octane action of the first film still in evidence but this time it is added to by Guillermo Del Toro's keen sense of style and atmosphere. The production design is fantastic and the script involving different factions constantly vying for the upper hand is far more complex than that of most superhero films (David Goyer went on to co-write The Dark Knight). My only gripe is that some of the CGI is starting to look a little dated in a similar way to the original Spiderman films, but this is a comparatively minor point. It may not be to everyone's taste, but for fans of the genre it is a visceral cocktail of vampiric gore and martial arts mayhem that action junkies and horror fans alike should not miss.

Spanning an hour and 50 minutes, there is enough entertainment value to hold everything together. Set at a decent pace, the plot details come steady and at the right times, while the story houses a good combination of action, violence, and even some drama to top it all off.

The action is stylized with some great choreography, including some over the top moves backed by solid CG. The transition between CG to live action melds well during the fights scenes.

Wesley Snipes is one confident Blade, thus leading to a favorable hero. Ron Perlman and Luke Goss provider some excellent supporting characters and Leonor Varela is a delight on screen. If there is a flaw in this film, it is the under utilization of Donnie Yen.

It's a significant improvement from the first installment of this Marvel comic. Blade II is more darker, yet stylish but still suffers from the lack of character presentation and consistent storytelling. Wesley Snipes, once again wields the sword with a sharper edge, but still one-sided. 4/5