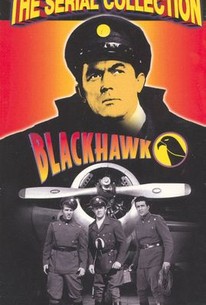 The 15-episode Columbia serial Blackhawk was based on the comic book created by Reed Crandall and Charles Cuidera. The title character is played by Kirk Alyn, previously the leading man in Columbia's Superman serial. Also returning from Superman is Carol Forman, here cast as slinky Soviet spy Laska. Together with his cohorts Olaf (Don Harvey), Andre (Larry Stewart) and Chop Chop (Weaver Levy), Blackhawk does his best to keep a revolutionary new death-ray from falling into the wrong hands. The film borrows a page from the 1937 Dick Tracy serial by having one of Blackhawk's freedom-fighters (Rick Vallin) replaced by his evil twin brother.

Frank Ellis
as Hendrickson
View All

There are no critic reviews yet for Blackhawk. Keep checking Rotten Tomatoes for updates!

There are no featured reviews for Blackhawk at this time.