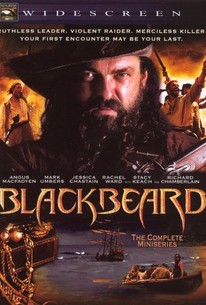 In the three-hour period television miniseries Blackbeard, Angus MacFadyen (Braveheart, Jason and the Argonauts) assumes the title role of the dreaded marauder who spent 1716-1718 terrorizing the Caribbean Sea. Born Sir William Teach, the mariner rechristens himself Blackbeard, and subsequently builds a legend around himself as the most merciless and loathsome pirate in world history by plundering as many ships and murdering as many seafarers as he can lay his dirty mitts on. Directed by Kevin Connor (Motel Hell, The Land That Time Forgot), Blackbeard co-stars big screen vets Rachel Ward, Stacy Keach, and Richard Chamberlain.

The production design is rather impressive, the thing (despite being too long) moves fairly quickly, and on the whole Blackbeard feels like a perfectly entertaining Saturday afternoon matinee.

There are no featured audience reviews yet. Click the link below to see what others say about Blackbeard!