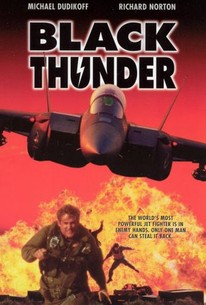 Vince Connors (Michael Dudikoff) is an Air Force test pilot who has been helping to perfect the Mach 2 fighting jet, a state-of-the-art weapon which incorporates special stealth technology which makes the plane invisible to both radar and the human eye. However, a band of Libyan terrorists have somehow gotten wind of the new jet, and in a daring raid they steal the Mach 2. Connors and his partner Jannick (Gary Hudson) are quickly sent on a secret emergency mission to recover the Mach 2, where Connors discovers that the terrorists are not his only enemies. Black Thunder also features Frederic Forrest, Nancy Valen, and Richard Norton.

There are no critic reviews yet for Black Thunder. Keep checking Rotten Tomatoes for updates!

There are no featured reviews for Black Thunder at this time.