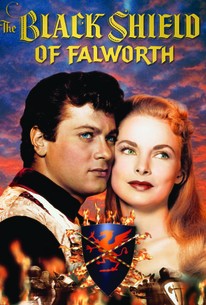 The Black Shield of Falworth Photos

Tony Curtis always seemed a little uncomfortable in costume epics, but this trait serves him well in Black Shield of Falworth. Based on the robust novel Men of Iron by Howard Pyle, the film casts Curtis as Miles, the son of a disgraced knight. Through the sponsorship of the Earl of Mackworth Herbert Marshall, Miles is trained for knighthood, an arduous process that earns him the ridicule of his fellow trainees, who regard him as little better than a peasant. Eventually, Miles proves his mettle by squelching a plan to oust King Henry IV Ian Keith from the throne of England. On a more personal level, Miles carries on a romance with Mackworth's daughter Lady Anne Janet Leigh, while Miles' sister Meg Barbara Rush finds happiness in the arms of knight-in-training Francis Gascoyne Craig Hill. The heavy of the piece is the Earl of Alban David Farrar, whom Miles must ultimately face down in a well-directed climactic set-to. Torin Thatcher, who'd previously costarred with Tony Curtis and Janet Leigh in Houdini, delivers another topnotch characterization as the no-nonsense trainer of Miles and his fellow aspirant knights.

Herbert Marshall
as Earl of Mackworth

Critic Reviews for The Black Shield of Falworth

Everything is just as it ought to be in such a picture.

A preposterous but harmless swordopera in CinemaScope, rather enjoyable on a comic-strip level.

Audience Reviews for The Black Shield of Falworth

Howard Pyle's story Men Of Iron, manages to inform this typical swashbuckler as a young man (Tony Curtis) must clear his family's name, get back his family's land, and get the girl (Janet Leigh, most buxom). The character actors carry this piece while the leads provide the eye candy. Typical, yet fun.

The Black Shield of Falworth Quotes