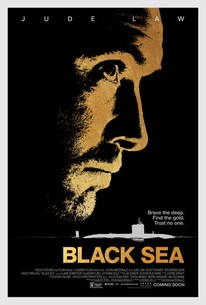 Critics Consensus: Black Sea may not be particularly deep, but thanks to Kevin Macdonald's judicious direction and a magnetic performance from Jude Law, it remains an efficiently well-crafted thriller.

Critics Consensus: Black Sea may not be particularly deep, but thanks to Kevin Macdonald's judicious direction and a magnetic performance from Jude Law, it remains an efficiently well-crafted thriller.

Critic Consensus: Black Sea may not be particularly deep, but thanks to Kevin Macdonald's judicious direction and a magnetic performance from Jude Law, it remains an efficiently well-crafted thriller.

A suspenseful adventure thriller directed by Academy Award winner Kevin Macdonald, centering on a rogue submarine captain (two-time Academy Award nominee Jude Law) who pulls together a misfit crew to go after a sunken treasure rumored to be lost in the depths of the Black Sea. As greed and desperation take control onboard their claustrophobic vessel, the increasing uncertainty of the mission causes the men to turn on each other to fight for their own survival. (C) Focus

Grigoriy Dobrygin
as Morozov
View All

Not much of it is credible, starting with the hiring of a rusty submarine out of Sevastopol, but it has action and adventure to burn, leavened with bits of humour.

Too often, moviegoers must choose between character-driven drama and edge-of-your-seat action. "Black Sea" has both, with a gripping performance by Jude Law as their nexus.

Black Sea is a submarine thriller set in the murky depths of exactly where the title says.

By no means a masterpiece, but a solid genre offering, a portrait of desperate men crammed together and surrounded on all sides by what one describes as "dark, cold death." What better way to escape the midwinter doldrums?

I'm something of a sucker for submarine-movie clichés; watching this movie, I was happy the very first time I heard a disconcerting ping.

A contemporary submarine thriller that serves the genre well.

While not breaking new ground cinematically, ultimately this is a good yarn, a tense two hour potential catharsis.

A likeable lead performance from Jude Law plus a handful of nervy twists and turns helps its claustrophobic narrative chug along to a finale of limited possibilities.

There is more than enough in Black Sea to keep fans of action movies happy - so long as they don't expect it to go too deep.

There's great beauty to the rusted wreck of a vessel and the film built around it.

Set any thriller inside a submarine, and it isn't long before the claustrophobia comes flooding in.

A brutal thriller, and almost a horror film with fear itself a virus. There's a pared-down urgency and realness, even though this is a preposterous tale -- of WW2 Russian gold at the bottom of the Black Sea. With a terrific turn from Jude Law.

The caper? Nazi gold on the bottom of the ocean. Nothing new there, but everything is done competently in this submarine treasure hunt, except for a couple of plot curiosities. Definitely fun, with a premium performance from Jude Law.

When it comes to submarine films, nothing will ever top Das Boot, of course. But this is a fresh, very worthy attempt to mix the intense underwater situation with a Dirty Dozen-like treasure hunt. To add human interactions to the list of technical difficulties to deal with is making the film almost unbearably exciting at times. Good acting, interesting characters, very grounded and pessimistic story and great direction: overall a very entertaining and engaging thriller.

An average underwater thriller. The performances outweigh the storyline.