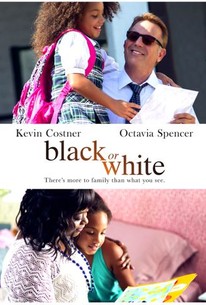 Critics Consensus: Black or White has more on its mind than your average family drama, but the film's approach to its thought-provoking themes too often lives down to its title.

Critics Consensus: Black or White has more on its mind than your average family drama, but the film's approach to its thought-provoking themes too often lives down to its title.

Critic Consensus: Black or White has more on its mind than your average family drama, but the film's approach to its thought-provoking themes too often lives down to its title.

BLACK OR WHITE is the story of a grandfather (Academy Award (R) winner Kevin Costner) who is suddenly left to care for his beloved granddaughter. When her paternal grandmother (Academy Award (R) winner Octavia Spencer) seeks custody with the help of her brother (Anthony Mackie), the little girl is torn between two families who love her deeply. With the best intentions at heart, both families fight for what they feel is right and are soon forced to confront their true feelings about race, forgiveness, and understanding. Anchored by an all-star cast and based on real events, the movie is a look at two seemingly different worlds, in which nothing is as simple as black or white. (C) Relativity

News & Interviews for Black or White

View All Black or White News

Critic Reviews for Black or White

Black or White isn't so much an offensive movie as it is a pointless one.

Oh, the bathos! The loony wrongheadedness of the screenplay!

Despite the best of intentions, a career-best performance from Kevin Costner, and outstanding work by Octavia Spencer and child actor Jillian Estell, "Black or White" succumbs to some of the same stereotypes it tries to dispel.

It may be helpful - or vexing - to think of "Black or White" as the great grandchild of "Guess Who's Coming to Dinner?"

Binder, who once made lowbrow comedies but now specializes in middlebrow dramedies, is in several leagues over his head with this story ...

"Black or White" stumbles even as it tries to move forward.

Too easy, breezy, and unabashedly middle of the road, Black or White doesn't truly grapple with contemporary issues of racism in America.

Wants to provide profound insight into racial relations and family, but the execution is heavy-handed.

Binder is handling some heavy material here, yet the direction constantly calls for comedic bits that undercut the gravity of each dramatic beat.

Simply casting too wide a net to feel truly satisfying. In trying to be color blind, it just comes off as tone deaf.

Black or White is a heartwarming film on the barriers of race, but it's also a deeply moving film about what it means to be family

Finding ways to get along is no black-and-white issue. It's complicated.

Audience Reviews for Black or White

This is a touching little family dramedy. This was a different part for Kevin Costner but he did a good job with it. The true star is the little girl, she is a great up and coming actress.