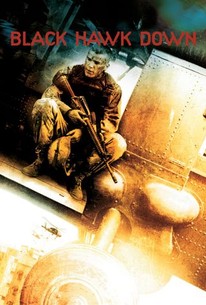 Critics Consensus: Though it's light on character development and cultural empathy, Black Hawk Down is a visceral, pulse-pounding portrait of war, elevated by Ridley Scott's superb technical skill.

Critics Consensus: Though it's light on character development and cultural empathy, Black Hawk Down is a visceral, pulse-pounding portrait of war, elevated by Ridley Scott's superb technical skill.

Critic Consensus: Though it's light on character development and cultural empathy, Black Hawk Down is a visceral, pulse-pounding portrait of war, elevated by Ridley Scott's superb technical skill.

A quickly forgotten chapter in United States military history is relived in this harrowing war drama from director Ridley Scott, based on a series of Philadelphia Inquirer articles and subsequent book by reporter Mark Bowden. On October 3rd, 1993, an elite team of more than 100 Delta Force soldiers and Army Rangers, part of a larger United Nations peacekeeping force, are dropped into civil war-torn Mogadishu, Somalia, in an effort to kidnap two of local crime lord Mohamed Farah Aidid's top lieutenants. Among the team: Staff Sgt. Matt Eversmann (Josh Hartnett), Ranger Lt. Col. Danny McKnight (Tom Sizemore), the resourceful Delta Sgt. First Class Jeff Sanderson (William Fichtner), and Ranger Spec. Grimes (Ewan McGregor), a desk-bound clerk getting his first taste of live combat. When two of the mission's Black Hawk helicopters are shot down by enemy forces, the Americans -- committed to recovering every man, dead or alive -- stay in the area too long and are quickly surrounded. The ensuing firefight is a merciless 15-hour ordeal and the longest ground battle involving American soldiers since the Vietnam War. In the end, 70 soldiers are injured and 18 are dead, along with hundreds of Somalians. Black Hawk Down was voted one of the top ten films of the year by the National Board of Review prior to its limited Oscar-qualifying release. On the basis of his work in this film, co-star Eric Bana, a relatively unknown Australian actor playing Delta Sgt. First Class "Hoot" Gibson, won the lead in director Ang Lee's version of The Hulk (2003). ~ Karl Williams, Rovi

Lee Geohagen
as Somali son with gun
View All

News & Interviews for Black Hawk Down

View All Black Hawk Down News

Critic Reviews for Black Hawk Down

I also don't know how well this 2001 drama represents the events of October 3 and 4, 1993, though I can see that it represents them in a realist vein, referring to other war movies without becoming frivolous.

Black Hawk Down makes that point without preachment, in precise and pitiless imagery. And for that reason alone it takes its place on the very short list of the unforgettable movies about war and its ineradicable and immeasurable costs.

A relentless immersion in combat strikingly realized but none too pleasurable to sit through.

[Scott] does a reasonable job sketching the complicated and contradictory political context, but attempts to bring in the odd Somali perspective are grossly inadequate.

Has the pointless verisimilitude of an expensively rendered computer simulation.

A first-rate war movie that presents its subject so horrifyingly well that it doesn't need to probe or preach.

The nobility and inspiration are in the action. It is in that sense a film very much in tune with America's mood: practical, resolute, fierce.

It looks fantastic, not least because it boasts helicopter scenes to rival those of Apocalypse Now.

Violent depiction of a risky rescue; adults only.

No film from the Zeroes - hell, maybe ever - more forcefully imparted the horrors of war as thoroughly, coherently and hauntingly. Even justified wars run rampant with monstrosities, and this showed just how critical camaraderie can be in conquering them.

Black Hawk Down" is a precise vision of how little war has changed in spite of America's high-tech equipment and extensive vocabulary of modern tactics.

While fine films like Saving Private Ryan depict warfare at its worst, they do not depict warfare in modernity. I cannot imagine a better representation of war, with all of its urban complexities, than Black Hawk Down.

Audience Reviews for Black Hawk Down

Ridley Scott takes on the subject of war. Everybody does their best as a technologically advanced American crew of expert soldiers work to extricate key figures in a dirtwater African town torn apart in a civil war --- until it all goes wrong, big-time. Hold onto your seats, it's going to be a bumpy ride, hoorah. Blistering combat, don't say I didn't warn you. For giggles try to spot the foreigners playing Yanks, I dare you. Having a weekend allnighter? Do a doubleheader with Zulu, with Michael Caine, another whiteys against the rampaging darkies show.

Not just a thoughtless quip-and-rip action blockbuster - decently memorable characters, precise tactical narrative, and a good amount of heart. And surprisingly, bridging the edge of my gore tolerance but not too overwhelmingly violent for me.

An American Black Hawk helicopter is shot down during a raid on a Somali warlord in Mogadishu leading to a desperate rescue mission faced with overwhelming opposition. In Black Hawk Down, Ridley Scott has created one of the most realistic war movies ever made. You really feel like you're in the thick of an urban warzone and the excellent ensemble cast make for very believable protagonists. It's usually a fine line between respect for the bravery of the fighting man and macho, gung ho bullshit, but Scott stays on the right side by focussing on the loyalty between comrades fighting for each others lives rather than the usual "God And Country" crap that many war films fall back on. It laso concentrates on the fact that despite what the propaganda machine may have us believe, modern warfare is, as ever, concerned with the brutal, harrowing deaths of many young men as the film has a lot more in common with The Alamo or Zulu than Jarhead or The Hurt Locker. It takes a lot of stylistic cues from Apocalypse Now making for artful visuals that are attractive without ever compromising the visceral realism of combat and despite a rather dry opening full of military jargon and diagrams, as the situation gets more desperate and the fighting more intense, it gets better and better. It's true the film doesn't really explore the political context of the conflict and the Somali side of the story is largely ignored, but what is presented on film is executed to perfection. One of the best modern war films around.

Black Hawk Down is one of the many war films I have watched recently. It too is one of the better one's I have watched. It is packed with a lot of talent. Which of course makes this film that much better because the performances are so good. Tom Sizemore is good in this movie and it makes me kinda sad to see his life go to shit, cause he is a tallented actor. Eric Bana was a bad-ass in this movie. He moves like a panther and doesn't seem scared but determined. Ewan McGregor plays Ranger Specialist Grimes. He is very comfortable with his position of being behind the desk and out of the fighting scene. But when his time comes it's a big surprise at how he handles himself in the crossfire. Plenty of action in this film. It's loaded with plenty of exploisions, blood, and gore. It's sad, funny, and like any war film, scary that people go through this. It's not a movie I would watch again. I just don't watch most war flicks more than once."