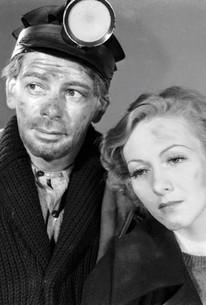 Like many 1930s Warner Bros. films, Black Fury drew its inspiration from the headlines. The story is adapted from a true-life incident from 1929, wherein a striking Pennsylvania coal miner was beaten to death by three company detectives; this served as the focus for Henry R. Irving's stage play +Bohunk as well as Judge M. A. Musmanno's story Jan Volkanik, both of which were woven into Black Fury's screenplay. Using a Polish accent so thick one can cut it with scissors, Paul Muni plays an illiterate miner, happy in his job and his company-town surroundings until his girl Karen Morley deserts him for policeman William Gargan. A disconsolate, drunken Muni stumbles into a labor meeting, where his loud, unthinking outbursts win him the leadership of the new miner's union. When the company locks out the strikers and brings in scabs, the angry miners hold the thick-headed Muni responsible. Fellow miner John Qualen, Muni's best friend, is then killed by a gang of rampaging hired goons. Vowing to "feex" the situation, Muni kidnaps head goon Barton MacLaine and takes him into the bowels of the mine with several sticks of dynamite in tow. Muni threatens to blow himself, MacLaine, and the mine to smithereens unless management comes to terms with the union. Thanks to overwhelming public support, the owners capitulate, and Muni is the hero of the hour. Though it seemed uncompromising in 1935, Black Fury obviously pulls its punches when seen today; for example, it is suggested that the mine owners are guiltless regarding violence against the strikers, laying blame on the hired detectives, who are shown to be in the employ of a crook who plays both sides against the other. Even allowing for this, Black Fury is one of the most powerful of Warners' "social conscience" films. Although the Academy gave Muni a Best Supporting Actor nod for this film, the AMPAS database indicates that it wasn't an "official nomination" - he was a write-in candidate, and came in second.

In a class by itself, this picturization of a strike in a coal-mining town has Paul Muni, America's best actor, portraying a Polish-American worker who is good natured when let alone, but terrific when aroused.

Regarded as a sociological explanation, it is pretty nonsensical. But looked on simply as a story, it is vivid, exciting and brilliantly dramatic.

It's lively, probably good for its time period and is properly sympathetic to the hard-working miners; when viewed today it's badly outdated.

There are no featured audience reviews yet. Click the link below to see what others say about Black Fury!